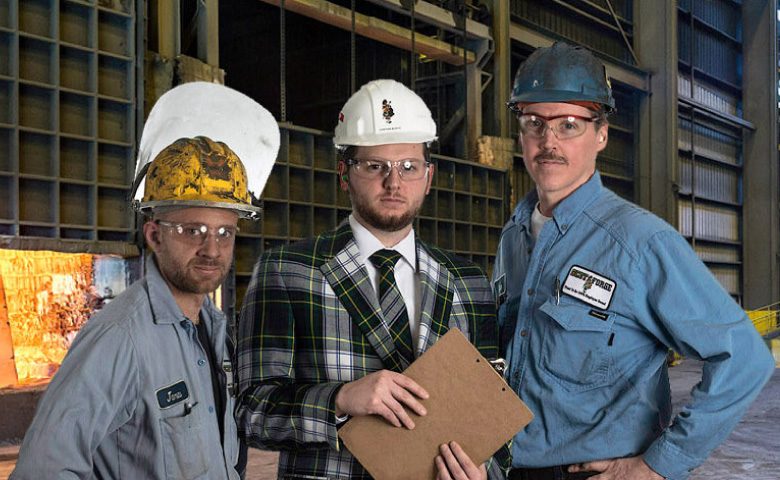 Named one of America’s Safest Companies in 2014, the employee-owners of Scot Forge are devoted to upholding a world-class safety program.

You don’t become one of America’s Safest Companies overnight. So when Scot Forge was named one of 2014’s safest workplaces, it was well-earned recognition of the company’s years of dedication to improving their safety record. 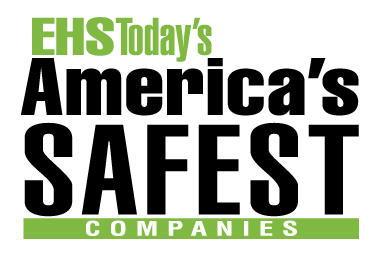 Exceeding compliance, steeped in culture, engaged in safety, Scot Forge tied all of the required components together with SafeStart to form a safety program that stands out as much as the tartan fabric they pride themselves on. But it wasn’t always this way.

With 1.3 million square feet of manufacturing space across 3 Scot Forge facilities and 2 joint ventures, Scot Forge employs over 600 people and manufactures open-die and rolled ring forgings in ferrous and non-ferrous materials for military submarines, nuclear facilities, and massive civil engineering projects like moveable bridges. And in 2010, a time when Scot Forge was experiencing frequent injuries resulting from a lack of situational awareness, the company decided to add Safestart as a tool to boost safety awareness.

Little did the employees know that four years after adopting SafeStart, Scot Forge would become the first forging facility to be named one of America’s safest companies by EHS Today Magazine. Along with 18 other businesses in other industries, Scot Forge was presented with the prestigious award from EHS Today which honors companies that “provide a safe working environment for thousands of employees and serve as a point of reference for companies hoping to achieve world-class safety status.”

So what did the employees of Scot Forge do to deserve this award? It starts with a decrease in TIR from 5.0 in 2010 to a rate of 1.3 in 2014. That’s a 73% reduction since SafeSart was implemented. The company ships over 250 million pounds of forged material annually, and in such a complicated and hazardous operation achieving a reduction of that magnitude is impressive.

And the safety accolades don’t stop there. Scot Forge has also had an enviable number of injury-free months, enabled employees to conduct a stunning volume of safety observations and has benefited from significant financial savings.

As you’ll see, Scot Forge truly deserves their spot on the list of America’s Safest Companies—and it’s an award they earned through vision, focus, dedication to the SafeStart process and years of hard work.

When Scot Forge was founded in Chicago in 1893 it was a small hammershop, and over the years it has transformed into an international forging giant. Despite a century of change, Scot Forge has remained a leader in the forging industry, in large part due to their status as a 100% employee-owned company… so it’s no surprise that its employees feel a sense of ownership over their work.

When it comes to safety, the company spent years eliminating and controlling hazards and developing sound safety systems, but was still searching for ways to further improve personal accountability for safety among its employee-owners.

A team of 18 employees took responsibility for implementing SafeStart in order to improve awareness of potential sources of injury. They believed that a program delivered by trained peers would have a powerful impact on all employees. And they were right.

Originally planned as a pilot implementation, the initial training session provided such overwhelmingly positive feedback that plans for a company-wide SafeStart rollout were put into action. In just 8 short months, Scot Forge trained over 600 employees at 3 sites and across 3 shifts.

SafeStart quickly became a powerful presence at Scot Forge and finding ways to incorporate it into daily operations became a routine activity. Soon after, SafeStart was integrated into the company’s Behavior Based Safety (BBS) process and maintenance work orders. Constant reminders of SafeStart concepts were also posted in conspicuous locations throughout the workplace.

Conversations are an incredibly effective way to keep safety at the forefront of everyone’s mind and, in order to increase situational awareness, Scot Forge knew it needed to give its employees the necessary skills to conduct regular safety conversations and observations.

In other words, the program provided employees with the tools to have more effective conversations—and to have a lot more of them too.

Since September 2012, Scot Forge employees have conducted over 40,000 observations that reinforce SafeStart principles. That’s 68 conversations a day that seek to eliminate close calls and injuries. It also builds a remarkable safety culture in which workers know their peers are looking out for them and that everyone can initiate a frank conversation about behavior in (and out) of the workplace.

The change in the employees’ attitude and behavior is clear. John McGillivray, Safety and Environmental Manager at Scot Forge, states, “I can’t tell you how many times someone comes into my office and says, ‘I was about to do something this past weekend, and I thought of SafeStart and I didn’t do it/I changed how I was going to do it.’” 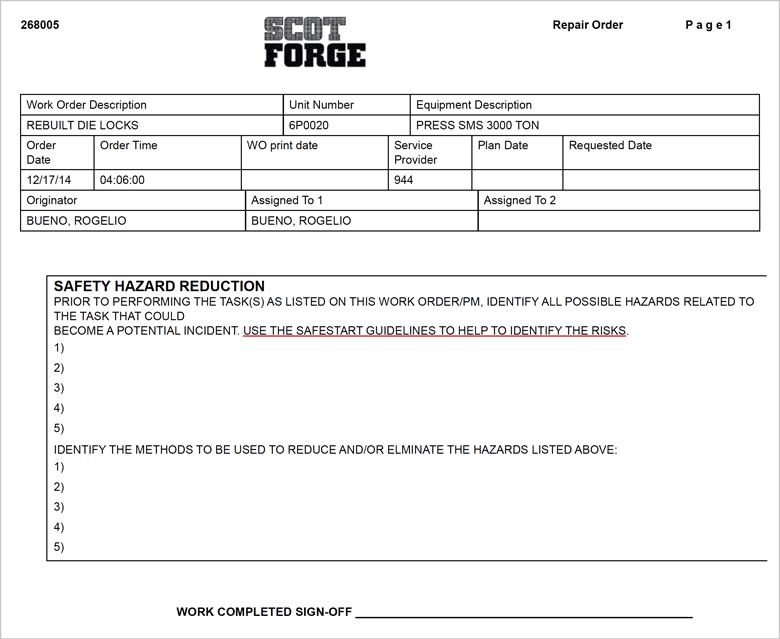 SafeStart quickly became a powerful presence at Scot Forge and finding ways to integrate it into daily operations became a routine activity.

How Many Months Without Injuries?!

One of the ways Scot Forge tracks injuries is by calendar months. Going a full month without a recordable injury is a notable safety achievement, and every month in which someone gets hurt is a sign that there’s still more safety work to do.

In the following 54 months since SafeStart was implemented, August 2010 to January 2015, the company celebrated 16 calendar months without any injuries, a rate of nearly 30%. That’s a 1500% increase in the number of injury-free months.

And at the moment, 75% of the company’s production departments have worked over a year without a recordable injury. One major success factor is that Scot Forge has integrated the SafeStart process everywhere, from the shop floor to the administrative offices, and SafeStart is as common as the company’s tartan plaid. Every employee relies on their SafeStart knowledge and skills to monitor and adjust their own actions and decisions while also using their increased safety awareness to look out for others.

Even temporary workers are included in the observation/feedback process. One of the company’s plants is undergoing three major expansions and it’s been noted that Scot Forge employees have been significantly more conscious of the contractors’ work habits. With a shared understanding that it’s in everyone’s best interest to speak up about safety concerns, Scot Forge employees quickly bring contractors into the fold whenever they notice unsafe behavior. This is just one of numerous signs that workers are using SafeStart to heighten their awareness of safety, not only for themselves but to protect others too. 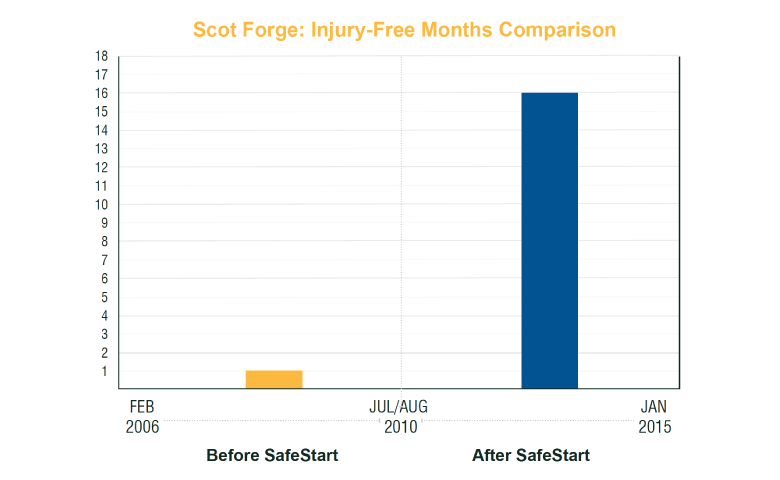 In addition to seeing reminders of SafeStart throughout the workplace, Scot Forge’s upper management has been a constant source of support for the ongoing improvements in safety and continue to stress the importance of finding ways to keep SafeStart part of every employee’s daily lives… both on and off the job.

The Fabric of Safety

Exceptional safety is the result of a well-rounded system. With SafeStart, Scot Forge is able to weave the different elements of safety together in a tight-knit safety program. Here are the major components that make up the safety fabric at Scot Forge—and can be found in every successful company safety program. 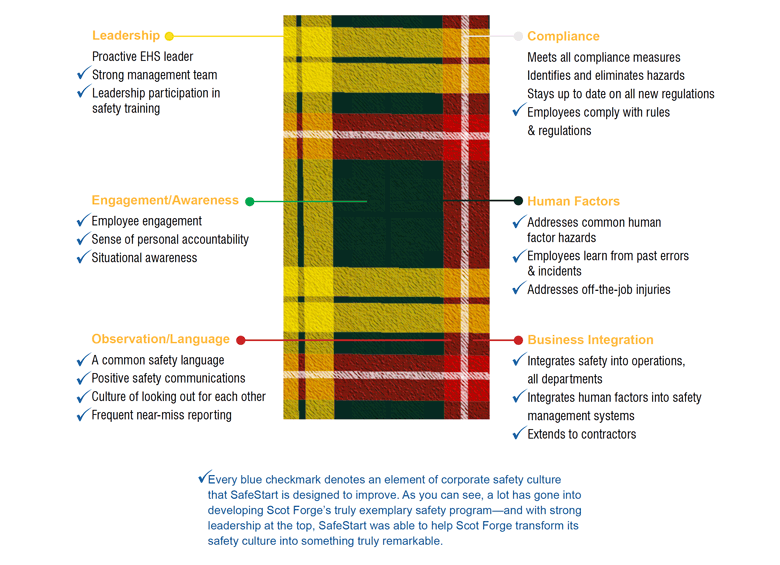 The Price of Safety

Every success has its price, and becoming one of America’s Safest Companies has required a great deal of effort from everyone at Scot Forge. But 4 years after implementing the SafeStart process, the company is reaping unanticipated benefits from the new safety program. 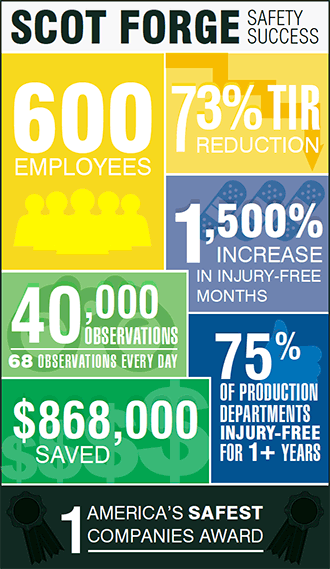 When you compare the number of injuries in the four years prior to SafeStart to the injury rate after the program was rolled out and multiply that with the average cost of an injury at Scot Forge, the company estimates that “beyond the avoidance of harm to our employees, the financial savings from avoiding medical costs and settlements is valued at $868,000.”

That’s an average medical and administrative savings of $217,000 per year. And this doesn’t even account for the added value of avoiding injuryrelated production slowdowns, the cost of replacing a skilled employee with a less-experienced stand-in, or the difference in workers’ compensation rates.

Huge decreases in injuries coupled with significant financial savings are just two of the reasons that led EHS Today to recognize the company as a national leader in safety; Scot Forge is a clear demonstration of how SafeStart can transform a company’s safety performance.

Overall, the company believes SafeStart has demonstrated that it is a phenomenal tool to build a higher level of employee engagement and reach the high-hanging fruit that is left when a company has achieved compliance and eliminated blatant physical hazards. McGillivray puts it simply, “[Safestart] is one of the best tools I have found to create a culture that drives towards achieving zero incidents.”

Scot Forge attributes much of their safety AND quality performance improvement to SafeStart.

As noted in the original case study, prior to SafeStart being implemented, Scot Forge only had one month without a recordable injury, company-wide (3 locations), in a 54 month period. In the 54 months after implementation, Scot Forge achieved a total of 16 months injury-free. Four years later, Scot Forge has sustained that pace of improvement achieving 37 months injury-free after nearly 100 months of using SafeStart. Their TIR has dropped by more than 80% below the rate they had at the time of SafeStart’s implementation and worker’s compensation costs have dropped substantially, averaging under $10,000/yr for 2016 and 2017, with 2018 tracking to match that performance. 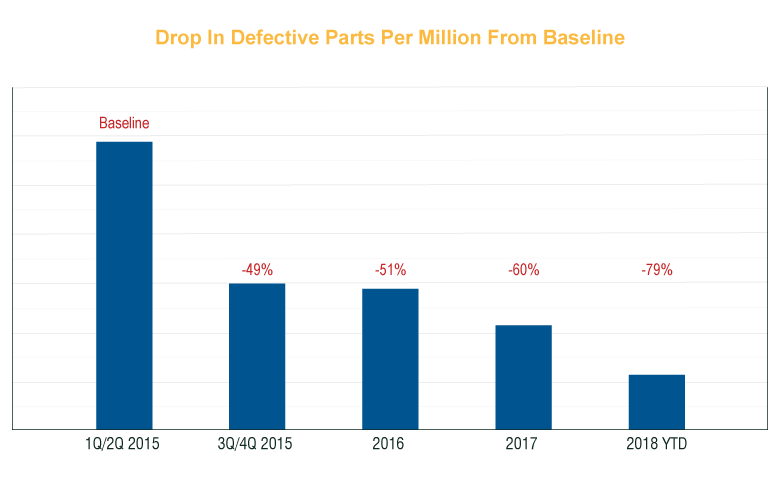 Beginning in July 2015, Scot Forge integrated SafeStart principles into their quality management process to enhance their more traditional quality improvement efforts. Through this combination, Scot Forge has been able to drop its defective parts per million rate by 79% in only three years.

Scot Forge has found that SafeStart provides a powerful common platform and mindset for reducing human factor errors that can be applied across multiple business-critical processes. Through this alignment, the organization achieved enhanced implementation efficiency and active engagement by the workforce that resulted in faster performance improvements, leaner processes, and cost savings. Scot Forge will continue to look for ways to apply SafeStart principles in more areas of its business. 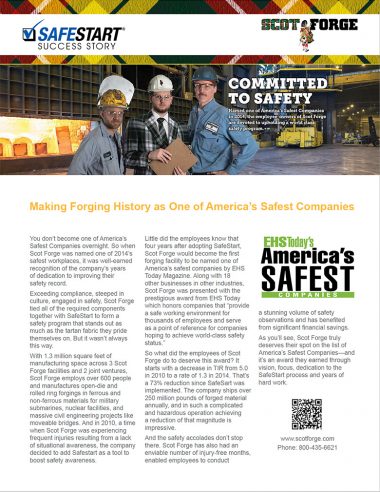 You can view or download a PDF of this case study, and the 2018 update, using the buttons below.