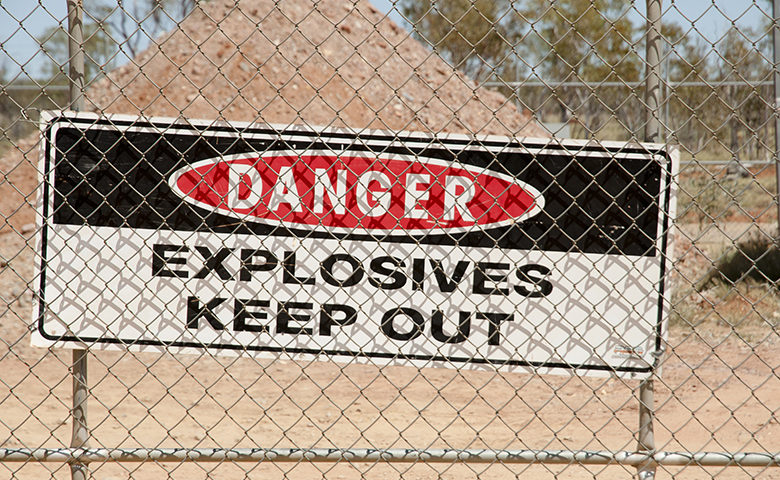 The dangers of explosives are clear. And yet many people are injured or die in explosions each year. There are various precautions required to deal with explosives but serious incidents still happen.

The quality of explosives and safety regulations regarding their use are significantly better than they used to be. But the hazards are still present, and improper storage methods or improper use can lead to serious incidents.

There are safe practices designed for working with explosives and they must be followed to protect workers and the general public.

Explosives should be kept in proper storage facilities to protect them from the elements and possible degradation. Magazines have very clear design specifications that must be adhered to in order to ensure proper and safe storage, to minimize the possibility of inadvertent ignition and to protect employees and others.

For example, heating a magazine has to be done in such a way as to not direct the heat onto the explosives but to keep their temperature constant. OSHA’s regulations are very specific (e.g., “The electric fan or pump used in the heating system for a magazine shall be mounted outside and separate from the wall of the magazine and shall be grounded.”), but the basic requirements are that the explosives must be:

Magazines storing explosives (whether they’re buildings or containers) must adhere to a number of requirements:

Transportation of explosives needs to follow regulations regardless of whether it’s long or short distance. Employers must develop procedures in accordance with the regulations to protect workers and bystanders.

The use, delivery and handling of explosives must be performed by competent workers with the right training and experience. Not only must they always use extreme care, but they also have to know and follow all the procedures and regulations to ensure everyone’s safety. Such regulations cover all aspects of the use of explosives from packaging to weather conditions.

For the safety of employees and the general public, all workers handling, using or affected by the use of explosives must be trained in all the relevant safety procedures. This is to ensure that all workers are familiar with the various explosive materials they may work with and with the procedures they have to follow if they’re faced with out-of-the-ordinary situations (such as explosives found in an incorrect place). But even proper use of explosives could lead to dangerous situations such as:

With all the risks involved, a thorough, comprehensive safety training plan is vital. It should aim to prepare workers not only for predictable situations but also for unusual ones. In addition, regular refreshers are always needed as they help keep safety information fresh and relevant.

When handling explosives, every opportunity to mitigate any potential errors must be considered, so adding human factors to the training program is also critically important. This type of training prepares the workers to recognize and address states of mind (such as rushing or fatigue) that can easily influence decision-making and lead to errors. A deep understanding of human factors is also needed for the development of effective engineering solutions, procedures and checklists.

Knowing the rules and regulations is not always enough. People handling explosives need to be well-trained and mindful of the risks and of their own states of mind. For example, a sleep-deprived employee is much more likely to forget or miss something vital, exposing themselves and others to greater risks. And when handling explosives, increased risk is not an option.