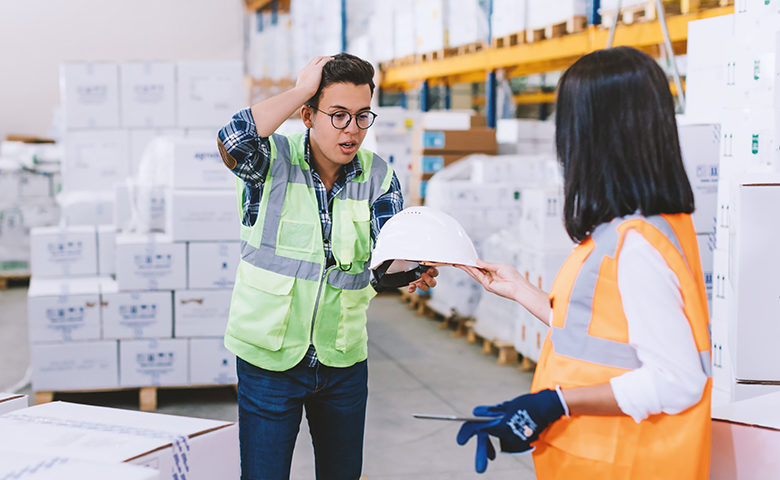 Complacency can lull people into a false sense of security and cause them to downplay any risks that surround them. The more comfortable they get doing something (and nothing bad happens) the less they think about the associated hazards. And the longer they go without an incident, the more confident they become that nothing bad will happen until the thought doesn’t even enter their mind. When it comes to workplace safety, complacency can make all of the safety measures put in place void.

Here are four signs that your employees are under the influence of complacency.

A near-miss is an unplanned event that had the potential to result in an injury, illness or property damage. Because it’s so hard to detect complacency within oneself, it often isn’t until a close call—or an injury—takes place that someone realizes they were being complacent.  At the time of the incident, the shock of that close call will jolt all involved parties back to attention and allow them to reflect on their level of complacency.

The problem is that a near-miss can feel like a free pass. Often the involved parties will laugh it off because there weren’t any injuries or major damage, allowing them to sweep the experience under the rug and move on. But just because the incident didn’t result in more serious consequences doesn’t mean it should be overlooked. The fact that it almost had dire results should be cause for as great a concern as an accident or injury.

When a company gives a near-miss the attention it deserves, the organization is sending the message that a near-miss is just as serious as an accident. And the more often that awareness is brought to the forefront, the less likely it will contribute to the critical errors that caused the complacency in the first place. There shouldn’t be fear of reprisal—it’s important for companies to ensure that employees know they won’t get reprimanded for reporting near misses.

There are times where you complete tasks and you have no recollection of the process of doing them. Think about all of the times you’ve driven home only to come to when you pull into your driveway. As discussed in our distraction webinar, this phenomenon is called highway hypnosis. It’s what happens when you go on autopilot while driving the same route to and from work. The habits from that repeated drive take over, allowing the driver to make the same turns, and stop at the same stoplights and signs in a trance-like state—there is no recollection of the drive once it’s completed.

Most people find themselves going on autopilot like this when the tasks they’re completing become routine. It’s truly amazing to see habits in motion when complacency fully sets in. But it’s scary to think of what could have happened while in that trance-like state, especially when the task happens in the workplace and involves large machinery or a great deal of hazardous energy

What’s even more alarming is that the more comfortable people become with a task, the more likely they are to take shortcuts. Did you know that 72% of employees take safety shortcuts? This is a sure sign that you’re under the influence of complacency—which makes you more susceptible to other human factors like rushing, frustration and fatigue going unchecked.

The more pressure there is to complete a job on time, the more likely a worker will rush to finish. Often with rushing, the resulting work will be poor quality or result in errors, workers will omit PPE, not use the right tools for the job or not follow the right safety procedures. Ultimately, rushing could result in a serious injury or fatality. The same outcomes can be expected from frustration and fatigue. This compounding of human factors that complacency cultivates multiplies the risk of making an error that could lead to an injury.

Perhaps the most obvious sign of complacency is when people don’t wear PPE when it’s required. Most employers have heard a myriad of excuses but regardless of the reason, it’s obvious that the worker has become complacent to the risks around them.

Our short PPE webinar talks about a survey that uncovered the fact that 98% of workers witness their colleagues performing activities without PPE when they should be wearing it. Another sign of complacency is when employees don’t say anything when they witness their coworkers not wearing PPE.

It’s not that employees don’t know the risks of being complacent, but complacency helps people feel like they’re not actually in danger. A good human factors training program can heighten awareness and help employees work on their habits to ensure that when they do go on autopilot, their good habits will hopefully get them through.

How to Make Safety Training More Adult
How Aware Are You When It Comes to Safety?