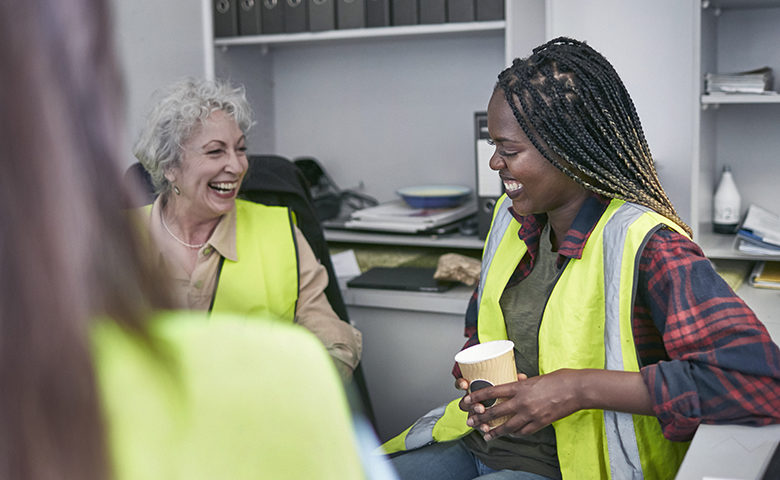 In many companies, employees feel like there’s a big divide between them and management. As Tajfel and Turner’s social identity theory (us vs. them mentality) explains, part of our concept of “self” comes from the groups that we belong to.

When employees feel like they’re undervalued by management, there’s an immediate disconnect from the organization making it very difficult to get workers to buy into a company’s mission and culture. Motivation will also be a major problem, and these issues are clear signs that there are problems with the company culture as well as with employee engagement.

A lot of people are confused about the difference between culture and engagement.  The two are definitely related and can be dependent on each other, but they are not the same thing. Engagement focuses on how employees feel about the way things are done, and culture is the unspoken beliefs, values and social norms that are held by the employees and the organization as a whole. The culture within a company often creates engagement, and engagement is required to improve the culture.

With that in mind, here are three basic principles for building employee engagement in order to strengthen organizational culture:

There’s a saying that a person who feels appreciated will always do more than what is expected of them. When you treat employees like they matter, like they’re a person and not a number, it’s amazing how that positivity will transfer into all areas of their work.  According to a research report by the Society for Human Resource Management, “Respectful treatment of all employees at all levels was rated as very important by 67% of employees in 2015, making it the top contributor to overall employee job satisfaction for the second year in a row.”

A big part of this respect is establishing trust. When managers micromanage, they are telling their employees that they don’t trust them to do their job. Workers need to feel like managers have faith in their ability to do the job they were hired to do and give them the autonomy to do it. If they don’t feel that way then their workplace behavior suffers.

When employees are given the opportunity to do their job well, a sense of pride will be formed. That pride not only applies to employees’ specific duties but to the organization as a whole. When it comes to safety, employees will not only take responsibility for their own safety but they will be inclined to take accountability for the safety of those around them too.

Often, people feel that incentives are the best way to reach employees. And while this is a great way to get their attention or to get them to participate initially, it does not turn into long-term improvement. According to Dr. Paul Marciano, author of Carrots and Sticks Don’t Work, traditional reward and recognition programs actually decrease the overall morale among employees. He says that “employee of the month” is the worst program you can implement since it will immediately demotivate your team.

In a recent Gallup workplace survey, the most memorable recognition often comes from an employee’s manager (28%).  Typically, it’s not an extravagant gesture that stands out the most. Instead, it’s a simple thank you when it’s warranted. A handshake or a pat on the back. Acknowledging the effort put in and a job well done. But it needs to be personal. Taking time to specifically address someone is what will stand out the most. Use their name and be positive in the interaction. An email or text message is easy but there’s no personality in it. It’s easily forgotten and the sentiment doesn’t ring as true as taking the time to talk to someone in person.

When an employee is recognized for good behavior, it tends to rub off on their peers. They will hold each other accountable for safety. The obvious example is enforcing PPE, but it extends to employees not using modified tools—and taking already-modified tools out of service, choosing safe practices over shortcuts, being more likely to intervene and making better safety-related decisions.

When employees have a clear expectation of what they’re supposed to do and understand how that relates to the vision, mission and values of the organization, they are more likely to be engaged in their work. Employees want to know that what they’re doing matters, and when they understand the meaning behind what they’re doing they will adopt a sense of ownership, they will make better decisions because they care about the company and the work that they’re doing.

It’s important for employees to get involved in activities other than the specific job they do within the organization to make them feel like they’re a part of the team. Engaged employees are enthusiastic and it’s this characteristic that’s found to go above and beyond, like sit on various committees (e.g., the joint health and safety committee) within the company. Their sense of belonging becomes greater when their involvement goes beyond their role at the company. When they actualize change the meaning becomes real.

This is the quintessential field of cultural dreams: if you build engagement, a good culture will come. This post, of course, is not an exhaustive list but it’s definitely a good place to start. Adopting these engagement practices into the company culture will show that management has a genuine concern for their employees. As stated earlier, engagement is not the same as culture, but it’s hard to have a good culture without it.