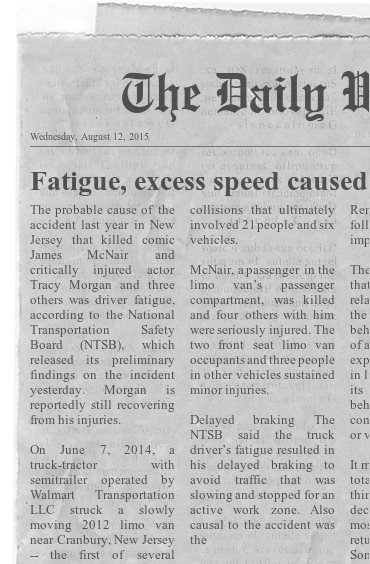 One industry that has forever had an issue with fatigue is the transportation industry. Commercial vehicle hours of service laws prevent truck drivers from driving more than the prescribed limit, but they do not govern what they do in their off hours. Comedian Tracy Morgan was injured and fellow comedian James McNair was killed following an accident that involved a driver who had been awake for over 28 hours which resulted in several collisions, even though he’d been driving for less than the 14-hour mandated limit.

Fatigue can affect jobs in every industry. In many workplaces, engineered processes and policies have been put in place to address fatigue on the job, especially in industries that are particularly hard-hit by fatigue like the airlines business. But incident after incident attests to the fact that these steps aren’t enough to prevent problems from occurring.

Tired EMS Workers a Prescription for Danger on the Roads, Experts Say

Fatigue is something that most people think you can just shake off, that you can control when you’re tired and when you’re alert. The reality is that fatigue affects your mental alertness, your physical coordination and your reaction time. In fact, fatigue is one of the most prevalent human factors—and that’s why human factors training that addresses fatigue and other common states like frustration, rushing and complacency is so important.

With the right training, workers can be educated on the effects of fatigue and how to include managing fatigue as part of their core safety skills. Knowing how to recognize fatigue and the potential danger you’re in when in that state could be lifesaving. Learn more about what you can do about fatigue in our free webinar.