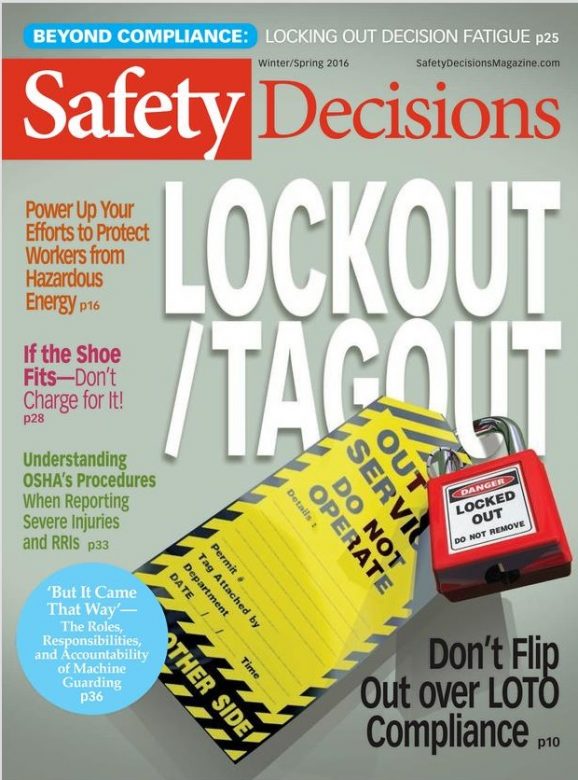 This is an adapted excerpt from the article “Locking Out Decision Fatigue” by Ray Prest originally published in the Winter/Spring 2016 issue of Safety Decisions magazine.

If you’re struggling with LOTO at your organization, you should reach for your highlighter, because the following is a crucial and woefully overlooked contributor to workplace deaths: Decision fatigue plays an enormous role in a worker’s ability to carry out the proper LOTO process.

Decision fatigue explains why it’s harder to stick to a diet after a long day—our mental reserves have been depleted and we have less energy to stave off cravings. It’s the same with choosing whether to exercise. It gives credence to something I hear frequently from safety professionals: Workers are more lax with following the rules towards the end of the workday, the end of a project, or the end of the week. And it could also point to why obvious procedures like LOTO can be overlooked.

When workers are suffering from decision fatigue, they may be more likely to make an error in judgment, such as thinking they can get away with not locking machinery out “just this once” or taking a shortcut that they perceive is a lot less risky than it actually is. Ask yourself when most LOTO violations happen. I’m willing to bet that the vast majority occur during the latter half of a shift after employees have had to make a number of decisions that have depleted their mental reserves. Or perhaps they’ve had an ongoing struggle with a piece of equipment—they locked it out the first few times but at some point fatigue and complacency started to set in.

If you don’t think your employees have to make many (or any) decisions at work, consider that even the most basic jobs require a constant stream of decisions to be made. Which tool to use, which route to walk across a construction site, or the best way to execute a task all seem like basic choices, but nonetheless they tax our decision-making muscles. Additionally, our willpower—or ability to make strong decisions—is strained in the same way regardless of a decision’s magnitude. This means that a series of small decisions can be just as taxing as a set of larger choices. It also doesn’t matter whether it’s job-related or personal. So when employees are forced to make more decisions than normal off the job, such as choosing details like paint color and carpet type in a newly built home or continually deciding to resist the urge to overeat because they’re on a diet, they may be less capable of choosing to wear personal protective equipment or following LOTO procedures at work.

Ray Prest is the marketing manager at SafeStart. As a thought leader on human factors in safety he regularly produces articles, blog posts and safety guides. Read Ray’s writing and learn more at safestart.com/ray.