This article by Larry Wilson appeared in the
April 2006 issue of Occupational Health & Safety.

In the quest to treat everybody fairly, quite often we forget the wisdom contained in the expression “different strokes for different folks.”

Although I have been on site to some 500 workplaces in Canada, the United States, Mexico, and Europe, I’ve never seen more than one set of rules and procedures—or, for that matter, more than one type of safety training program.

True, everybody is motivated not to get hurt. (Pain is pain at any age.) But if you ask anyone whether he would use the same approach to motivate a 20-year-old as he would a 60-year-old, everyone says, “No. I’d rather use a different approach for a 20-year-old than if I was talking to or trying to motivate a 60-year-old person.” Just as they’d respond to a gender question: Very few people would use the same approach on both men and women.

All good salespeople know tailoring your approach to the person is better than trying to use the same “pitch” on everyone. But not all safety professionals are or have been salespeople. In fact, one of the biggest problems the safety profession has is its inability to sell safety to senior management. True, selling isn’t exactly the same as motivating people to do or not do things, but there is such a fine line between the two that expressions such as “I can’t buy into that” or “We need to get buy-in from the employees” have become part of our daily business lexicon.

Selling is all about needs, wants, and benefits. A good salesperson knows this. Yet, as mentioned before, I have never seen (and I bet you haven’t, either) one set of safety rules for young workers and another for old workers. And you’ve never seen one set of procedures for young workers and one for older workers. Perhaps the rationale for this is that the hazards are “equal opportunity employers,” not to mention the difficulties and HR hassles of trying to administer anything other than a one-size-fits-all approach when it comes to rules and procedures. However, unless your company or work site is a statistical anomaly, your young workers and old workers get hurt more than your folks in between.

And at the end of the day, it doesn’t matter what age you are. Every injury counts, and at the end of the year, the number on the spreadsheet is all your CEO is looking at. So for reasons more important than the ones mentioned above, motivating people of all ages to work more safely is really what it’s all about. And while it’s true you can’t have different rules and procedures if you’re relying on negative reinforcement or punishment to motivate people, there’s nothing to stop you from using different approaches for different folks when it comes to positive reinforcement. This is true for both tangible and intangible reinforcers.

For instance, having some fun might be more reinforcing for a 20-year-old, but showing a little respect for a 60-year-old might be more reinforcing than fun. Different strokes for different folks. It may not be as easy as a one-size-fits-all approach, but to ignore the curve in the diagram (page 2) wouldn’t be a smart thing to do. That curve has been that way for more than 50 years, and unless human nature changes—unless 20-year-olds stop acting differently than 60-year-olds and vice versa—it is not going to change any time soon.

Nobody ever said seat belts prevent the car crash in the first place; they just help prevent it from being more severe. The same is true of fall arrest harnesses, which never stopped anyone from losing his balance. The second type (seat belt, fall arrest harness) is easier to enforce, and because being fined, written up, or handed a traffic ticket is quite motivating, the majority of attention (at most companies) focuses on what can be enforced and negative reinforcement systems designed to punish the people who don’t comply (e.g., progressive discipline or demerit points on your driver’s license).

Positive reinforcement for safe behaviors such as eyes on task, body position out of the line-of-fire, etc., is non-existent at most companies and sites. I bet you don’t know anybody who’s ever been pulled over by the police and thanked for being a safe, courteous driver. And yet, “you get more flies with sugar than you do with vinegar.”

Why don’t more companies use positive reinforcement to motivate people to work more safely? Perhaps the answer is that effective positive reinforcement for the ongoing safe behavior that prevented the incident or injury from happening in the first place requires you to observe the person working or to videotape the person. (You can’t say thanks for working safely or thanks for driving the fork truck safely unless you observe the person or videotape him. Otherwise, he knows you’re just blowing smoke.) You can say thanks for wearing your seat belt or thanks for wearing your safety glasses because it’s more or less a one-time thing. Positive reinforcement for ongoing safe behavior, however, that prevents the incident or injury requires being observed or being videotaped. Both are somewhat invasive—but, given a chance, everyone prefers being observed. 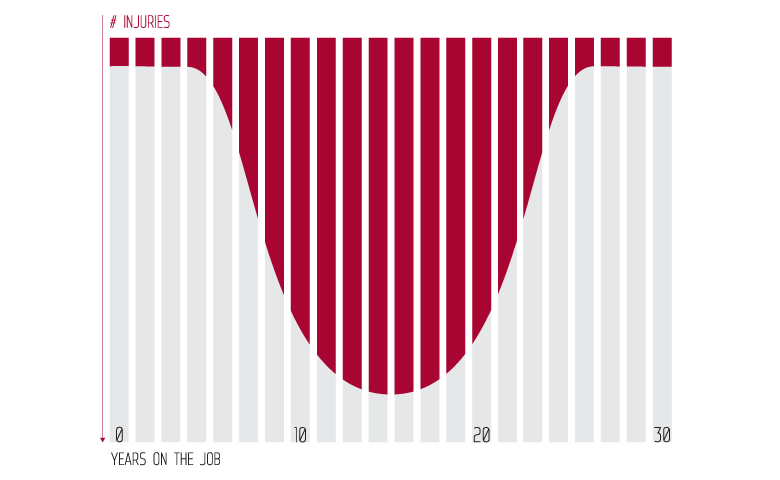 If you’re skeptical, try this exercise: Divide a group of employees into table groups of four to eight people. Ask the groups to discuss or share an example of a time when someone (a supervisor or co-worker) thanked them for working safety—on an individual vs. group reward basis—and they found the way that person thanked them motivated them to work more safely in the future. Most often, there will be a little noise at first as they try to start, but within a very short time (less than 30 seconds), there will be silence. This will be your cue to say something like, “So, maybe we need a little training or help with this, since none of us got much or any before now.”

Once you learn how to observe safe behavior accurately and objectively, and once you learn how to reinforce that safe behavior effectively so you are motivating (in a positive sense), then it’s easy to vary your approach. You no longer have to use the same motivators for everyone. It will require more effort than using negative reinforcement, to be sure, but it will be much, much more effective. 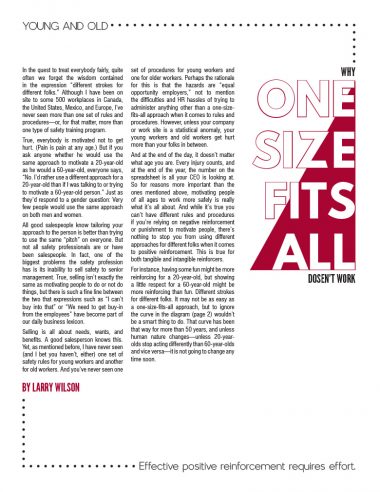