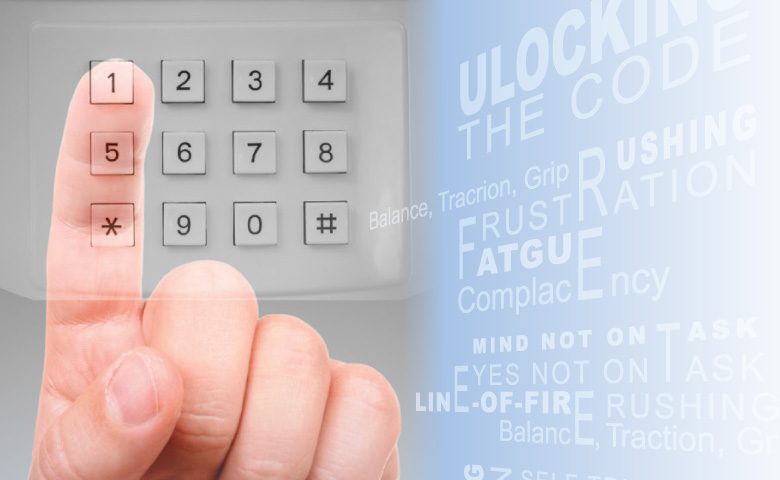 This article by Larry Wilson appeared in the
November 2012 issue of PSJ Magazine.

The title for this article came during a lunch meeting with the Director of Training and Development for a very large construction company. He was talking about making a training program specifically for reducing human error in the construction industry. What he said was, “You have unlocked the code to human error—at least for industry—but if no one in construction can relate to it, then it’s not doing any of these folks any good.”

I agreed, and we decided to produce a different lesson plan and learning design to teach these concepts—more easily—in a construction environment.

After he got me to commit to going forward with his idea, he paused and looked at me. Then he leaned forward and in a low, confidential tone of voice he asked me, “How’d you do it? How did you figure this out? I’ve been in safety, training and business development for over 30 years, and I’ve never seen anything like it… and I mean (pause), it’s not like you’re a scientist or anything… so how did you do it?”

“Well”, I said, “it’s really pretty easy to explain if you use terms that most people don’t really understand all that well. It’s also pretty quick too.”

He looked at his watch. “Ok, let’s try the short version,” he said.

“The short version is about ten steps or discoveries, not all of which were planned. The first is one of those unexpected events that happens at training sessions. It was from that event in 1989 that I discovered primary causation in the self-area to be over 95%.

The second thing was getting people to tell the truth about their own injuries and how human error was a contributing factor.

The next step was to reverse the ABC Behavior Model to reflect unintentional behavior or error.

I then interviewed hundreds of workers for positive deviance at high risk worksites.

From there, I did another Pareto Analysis on the human factors to identify four states or psychological activators that were daily.

I then tested the risk pattern with 20,000 people.

Next, the Critical Error Reduction Techniques (CERTs) were developed from the risk pattern and prior experience from implementing Behavior-Based Safety Processes.

Then we tested the critical error reduction techniques with several industrial clients in various industries.

It was from an event in 1989 where I discovered primary causation in the self-area to be over 95%.

“But not in construction,” he said.

“No, not really in construction,” I admitted.

He looked at his watch again. “Well, you’re right. I really didn’t understand all of that. I mean, I’ve heard most of those terms before, but I can’t say I really understood what you meant. So, how long does the long version take?”

“Well, I could probably stretch it out for hours, but what I think is interesting is that I didn’t know any of the terms or methods—other than the Pareto Analysis—when I started. In other words, I didn’t know that asking people who had never been hurt in 25 years—I didn’t know that was called positive deviance. It just seemed to me that they must have figured something out. I mean, some of these places had total recordable rates of over 100%, and yet there were always a few folks who had never been hurt.

So what you really have is a very unscientific journey into the world of safety and human error. It didn’t start with the idea or goal of, as you said, unlocking the code to human error or developing critical error reduction techniques. But rather, all I was trying to do at the beginning was simply to improve the efficiency of traditional behavior based safety; something that would give us a ‘leg up’ on the competition, so to speak.”

The third glance at the watch. “All right,” he said, “start at the beginning, but don’t take two hours. So tell me, did you really do it?”

So what you really have is a very unscientific journey into the world of safety and human error.

“Well, the first thing happened, like I said, in 1989. I was conducting a class for supervisors on positive behavior observations. Not that these supervisors were all that positive to be in a classroom for two days, but there we were, in the middle of nowhere (Fort St. James, B.C.) when I discovered that out of the 25 of us in the room, no one had been hurt on or off the job—because the equipment broke, failed or malfunctioned. Furthermore, none of us had been hurt because the other guy—someone else—did something unexpectedly; with the exception of contact sports, where the other guy was definitely trying to hurt you—which, by definition—means it wasn’t accidental or unintentional. (See Figure #1—3 Sources of Unexpected Events) 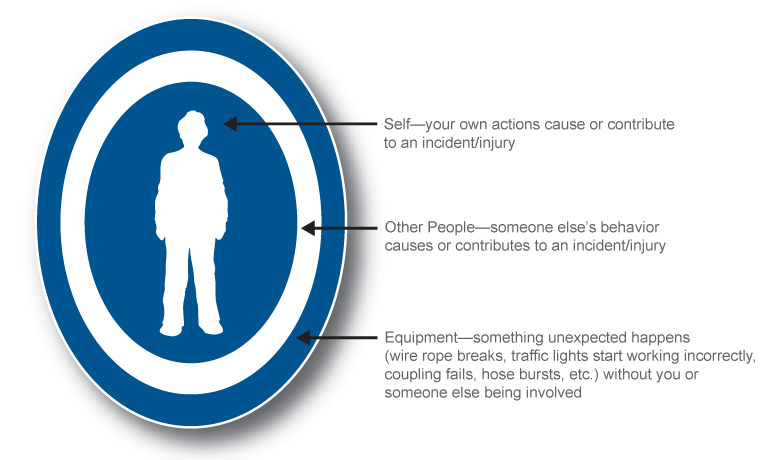 By the time I’d asked a thousand people the question, it became obvious to me that in terms of primary causation that the “self-area” was well over 95%.

So from there, it was fairly easy to deduce that the main cause of unexpected events in the self-area would be errors and mistakes—things we never meant to do in the first place, like slipping and falling, or dropping something.

So getting people to tell the truth was key to figuring out that the self-area and human error was 95% (or more) of primary causation.

The third step was to identify critical errors from critical behaviors, and in both cases, ‘critical’ means using the Pareto principle, or the principle of the critical few, or as a lot of people know it as the 80/20 rule; like 80% of your business typically comes from 20% of your customers, or in safety 80 or 90% of your injuries coming from 10-15 behaviors, hence the term, ‘critical behaviors’.

Since the critical behaviors were derived from the actual injuries at the worksite, the list varied a bit as you did this for different worksites that had different procedures and hazards. But there were some critical behaviors like eyes on task and line-of-fire that were on every checklist.

So looking over dozens of critical behavior checklists that I’d developed for clients, I identified four critical errors: eyes not on task, mind not on task, line-of-fire and balance, traction or grip.

The next step was to interview employees, at very high-risk worksites, who had never had a recordable injury. At one sawmill in British Columbia they were experiencing a total recordable injury rate of 134 per 200,000 hours. And yet, you could find people who had never been hurt in 20 or 25 years. Although I wasn’t sure, I thought that they must have figured some things out or that they had figured themselves out, and what I typically got from these people was not information about hazards or procedures, but rather, I got advice about human factors or states that cause human error.

Now the next step also involved the Pareto principle. If you start asking what causes people to make mistakes, you get lots of things, like rushing, frustration, fatigue, complacency, extreme joy, extreme sorrow, panic, etc. But if you think about things on a daily basis vs. an extreme basis, it doesn’t take long to figure out that it’s not Christmas every day, you’re not going to a funeral every day and with any luck at all, you’re not running from a burning building every day. But rarely a day goes by where you’re not in a rush, frustrated, tired or complacent.

This was the basis for putting the states and critical errors together to form the risk pattern that was virtually 100% of the injuries in the self-area, which I had already determined was responsible for primary causation—or the triggering event—in over 95% of all injuries, on or off the job. (See Figure #2—State to Error Risk Pattern)

However, when the behavior is unintentional like not seeing a stop sign or red light and going through the intersection without stopping, it’s because we missed the activator. So if you ask, ‘Why did you miss seeing the stop sign?’, and get the answer, ‘Because I was rushing,’ then you can ask, ‘Did you know you were rushing?’ They’ll say, ‘Yes,’ because you have to make a conscious effort to go faster than you normally go, so if you could trigger or recognize the rushing and then quickly think about the four critical errors, you’d be much less likely to miss seeing the stop sign. In other words, you’re replacing the physical activators like the stop sign or red light with a psychological activator like rushing, frustration or fatigue.

But there were some critical behaviors like eyes on task and line-of-fire that were on every checklist.

This became the first critical error reduction technique: trigger or self-trigger on the state so you don’t make a critical error.

Unfortunately, we can’t use complacency as an activator because it’s a passive state, whereas rushing, frustration and fatigue are active or different from normal when you’re complacent or not fearful of the hazard any longer—like driving 60 mph and the fear is no longer pre-occupying, then your mind can wander. And when you’re not thinking about what you’re doing, your behavior will be what you do normally or automatically or habitually. So another critical error reduction technique is to work on habits—like moving your eyes first, before you move your hands, feet, body or car.

However, relying on your habits and reflexes alone doesn’t give you the ability to anticipate a dangerous situation that’s about to occur—or could occur—and get yourself out of the line-of-fire. That, you need your mind for. So, if you watch others for the state to error patterns that increase risk, and you see someone following too closely for example, it will—most likely—make you think about your following distance. In other words, when you see a state to error risk pattern, it will make you think about risk and bring your mind back to what you’re doing, and it also helps you to stay out of the line-of-fire if they do eventually make a critical error.

The last technique is to analyze close calls and small errors—like momentarily losing your balance— and think about whether it was a state like rushing, frustration or fatigue that you didn’t self-trigger on. Or, if it was complacency, then it’s probably a safety-related habit that still needs more work.

So teaching people these four critical error reduction techniques—well enough so they can use them in real time—is the objective. And since you travel 88 feet per second at 60 mph, these techniques or skills really need to be practiced in order to be efficient. Self-triggering after the car crash doesn’t do you much good. (See Figure #3—CERT Card)

Anyhow, that’s how I developed the four critical error reduction techniques or as you said, ‘That’s how I unlocked the code to human error.’”

“Ok,” he said looking at his watch. “So, how are we going to do this for construction…?”

Larry Wilson has been a behavior based safety consultant for over 25 years. He has worked with over 500 companies in Canada, the United States, Mexico, South America, the Pacific Rim and Europe. He is also the author of SafeStart, an advanced safety awareness program currently being used by over 2,000,000 people in 50 countries worldwide.