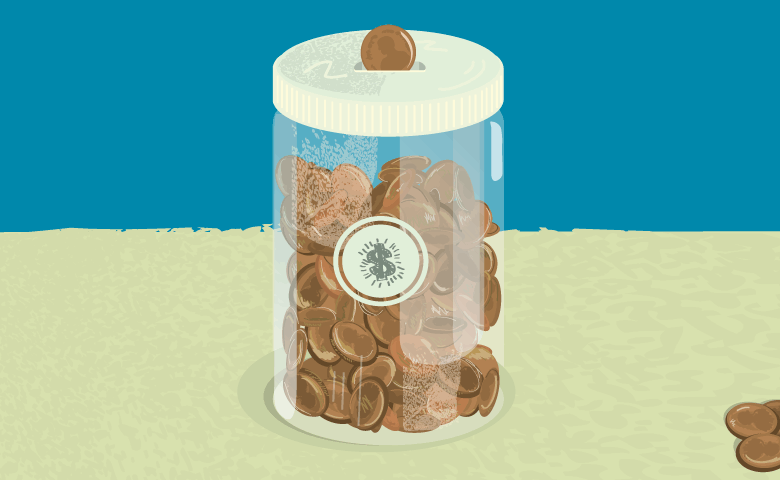 This article by Danny Smith originally appeared in the
April 2015 issue of Occupational Health & Safety.

Just because it’s hard to measure the specific financial benefits of reducing injuries doesn’t mean we should shy away from discussing safety’s impact on an organization’s bottom line.

You’ve probably heard some variation of the saying “there are two sides to every coin” more times than you can count. But have you ever applied it to organizational safety?

One side of the coin is injury prevention. Keeping workers safe is what gets most safety professionals out of bed in the morning and motivates them throughout the day. Reducing injuries and keeping people out of harm’s way is as satisfying as it is tangible, and injury statistics and lost-time incidents are tracked with regularity in corporate safety programs.

When it comes to what keeps safety professionals up at night, many times it’s not just thoughts of what could go wrong, but instead how they’ll justify the cost of implementing safety measures and processes that are often quite expensive. The other side of the coin literally deals with the coin itself—the financial aspect of safety. And this side can feel cold and calculating.

Nobody wants to think the reason we protect people on the job is because it saves the company money—safety professionals do it because it’s the right thing to do. But that doesn’t mean safety efforts don’t have very real financial implications. As we’ll see, money and safety performance are very closely linked, and many safety professionals do themselves a disservice when they talk about one without fully including the other in the conversation.

If you reduce the number of workplace injuries, then you potentially reduce the workers’ compensation premiums your company has to pay.

The link between finances and safety isn’t hard to see. According to the National Council on Compensation Insurance, the average medical cost of lost-time claims is $36,592. Because that number has risen every year since 1995, the cost of the medical treatment of workplace injuries is likely to continue increasing. The result is a rough equation that is as simple as it is self-evident: If you reduce the number of workplace injuries, then you potentially reduce the workers’ compensation premiums your company has to pay. Conversely, more claims will likely mean a higher total payout.

However, most employers aren’t simply handed a medical bill. Instead, medical costs, wage benefits, and other injury-related expenses are typically paid by workers’ compensation (WC) insurance. But a higher injury rate can lead to elevated WC premiums, and that can really add up quickly for many businesses.

A bit of behind-the scenes of workers’ comp: It is essentially no-fault insurance that is provided by employers to cover injuries and illnesses that arise out of or in the course of employment. The exact rules and resolution of cases can vary slightly because they are set by state law (with the exception of some specific industries covered by federal statutes), but the methods used to determine WC premiums are generally consistent from state to state.

The amount an employer pays in premiums is based on several components, including the type of industry the employer is a part of, the specific nature of an employee’s duties, and the physical work location. These are factored into actuarial tables—the inner workings of which most of us mere mortals could not begin to fathom—to determine expected losses. This formula determines the rate to be paid per $100 of payroll. 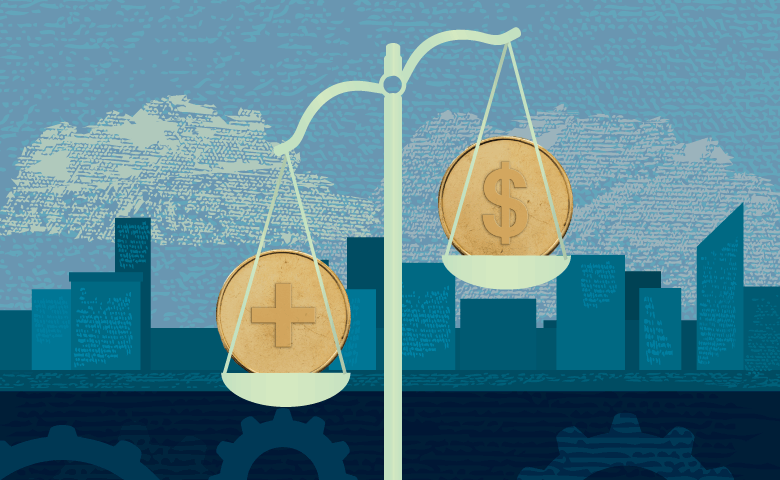 Employers can save anywhere from $3 to $10 for every $1 invested in workplace safety.

At the end of each policy year, the company’s actual losses are compared to the expected losses to form a ratio called the experience modifier. (There is some weighting into frequency and severity of claims, but let’s leave that up to the actuaries.) The modifier is calculated with a threeyear rolling average that excludes the previous year, so 2014 premiums are based on actual versus expected loss data from 2010, 2011, and 2012. For all employers, this experience modifier begins at 1.00 (or 100 percent) and moves up or down by percentage based on the rolling average. This modifier is then used as a multiplier to determine the premiums due.

If an employer’s injuries in the three-year rolling average were higher than expected, then the modifier climbs. As an example, let’s say this goes up from 1.00 to 1.29. This would mean the employer has to pay an extra $0.29 per dollar of premiums. If the premiums are originally $100,000 annually then the employer just lost $29,000 off the bottom line due to its higher injury rate!

The good news is the modifier can also drop below 1.00, which would result in a premiums credit. If we had the same 0.29 swing again, but this time because the actual losses were less than the expected losses, the modifier would drop to 0.71, which would represent $29,000 of savings based on the original $100,000 in premiums. As you can imagine, the overall cost of a safety initiative or training process is certainly much lower once you factor in workers’ compensation premiums savings.

43% of financial decision-makers believed the biggest benefit of their company`s workplace safety program was increased productivity. 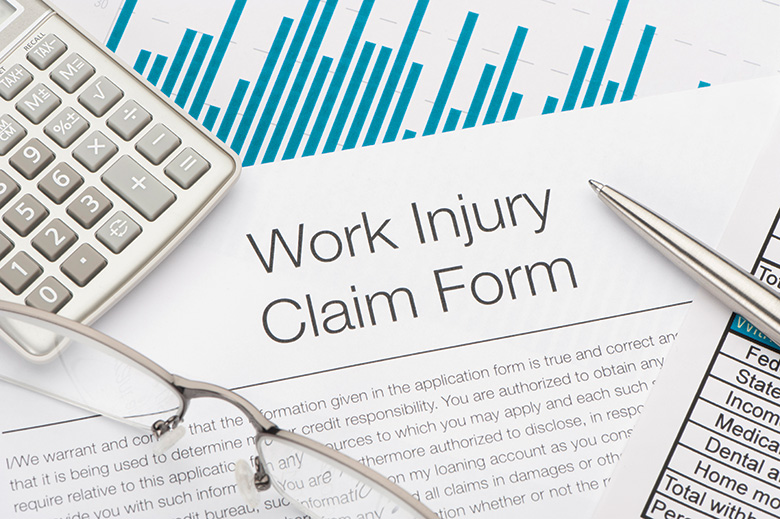 When we think of companies trying to save money on safety measures, we usually picture pennypinching CEOs trying to save a few bucks by taking safety shortcuts or failing to invest in proper guards, equipment, and processes. But maybe it’s time to update this picture.

According to the Vermont Department of Labor, employers can save anywhere from $3 to $10 for every $1 invested in workplace safety—much of that due to workers’ compensation savings. If you look closer, you can spot other savings as well, such as reducing the cost of lost-time replacements and the frequency of production slowdowns and equipment downtime. These problems are predominantly caused by the same human errors (such as employees who don’t have their eyes or mind focused on the task they are doing) that lead to workers’ injuries, and reducing the injury rate has the side effect of mitigating the financial impact of these issues, as well.

In fact, gains in production that result from safety improvements may be just as beneficial as workers’ compensation savings to the bottom line. A 2012 paper published by OSHA cites a survey of 231 companies with more than 100 employees. It found 43 percent of financial decision-makers believed the biggest benefit of their company’s workplace safety program was an increase in productivity. And it’s not hard to see why: Talk with almost any production manager and supervisor, and they’ll tell you that even fully trained replacement workers filling in for an injured colleague are not as efficient and often produce more scrap or waste.

So even if management’s goal is to squeeze the greatest amount of efficiency from the money spent on their company’s safety program, one can make a strong case that rather than cut back on spending, investing more in safety—even for companies that already meet regulatory standards—will result in lower insurance premiums and higher production. 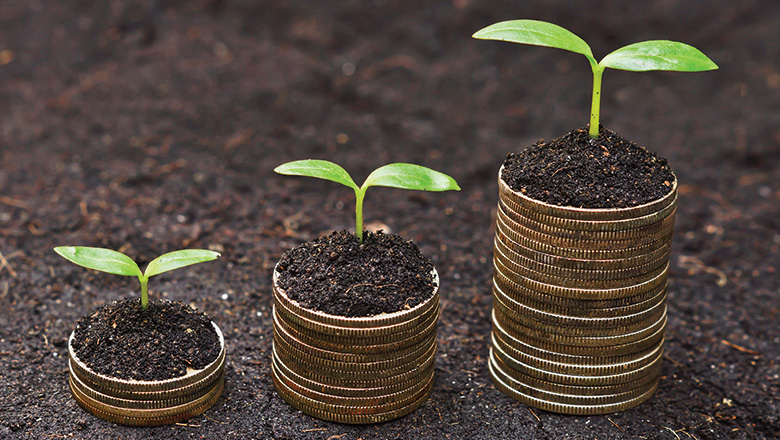 Despite all of these potential savings, it can be hard to properly examine the financial side of safety. This is likely because the savings are scattered throughout an organization and big-ticket items such as WC premiums can be hard to fully understand (after all, I don’t know too many folks who moonlight as actuaries). But just because it’s hard to capture and measure the specific financial benefits of reducing injuries doesn’t mean we should shy away from discussing safety’s impact on an organization’s bottom line.

From stakeholders to workers on the shop floor, everyone wins when investments in safety save both dollars and LIVES.

And being able to better discuss this side of the coin can help safety professionals make a stronger case for the ROI of safety investments. To paraphrase another famous saying, an ounce of prevention could be worth a pound of cash. From stakeholders to workers on the shop floor, everyone wins when investments in safety save both dollars and lives.

Danny Smith is a senior safety consultant with SafeStart, a safety training company that provides workers with 24/7 personal safety skills. He has presented on a range of topics at national and regional safety conferences. His background includes more than 25 years of management experience in safety, manufacturing, warehousing, and other industries. 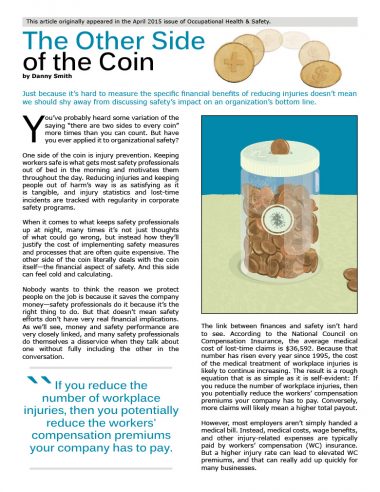