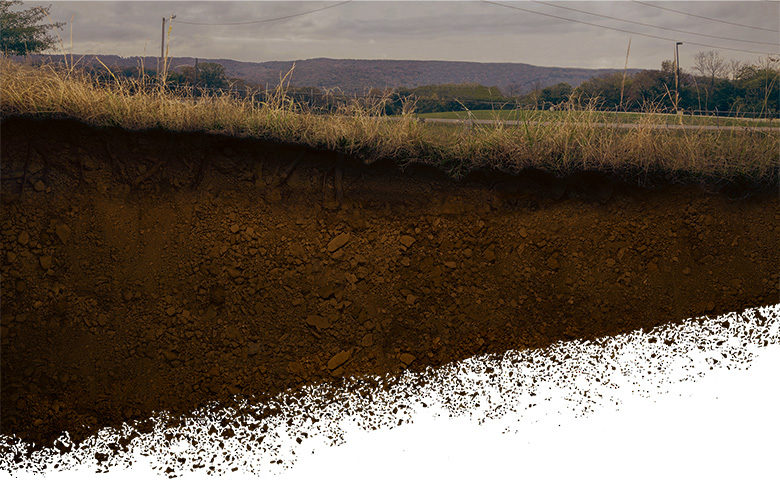 This article by Joe Tantarelli was published in VPPPA’s Spring 2018
(Vol 5. Issue 2) issue of The Leader magazine.

My accident—we’ll call it that for lack of a better term—happened in June 1983. I was 26 years old.

Maybe you can relate to me at 26: my Sundays usually bled into my Mondays and getting to bed at 2:30 a.m. only to leave for work at 5:30 a.m. was perfectly normal. That morning, I allowed myself a 20-minute nap as I rode in the passenger seat of the tractor-trailer rig that hauled our excavator to the job site.

I had been in the excavating business for seven years, five of which as the operator-foreman on the basement crew. When I first started in the business, my safety orientation was straight to the point, I was told:

We hustle here, all day, every day. If you’re not a hustler then go home now because there’s no way we can find the time to waste on you. 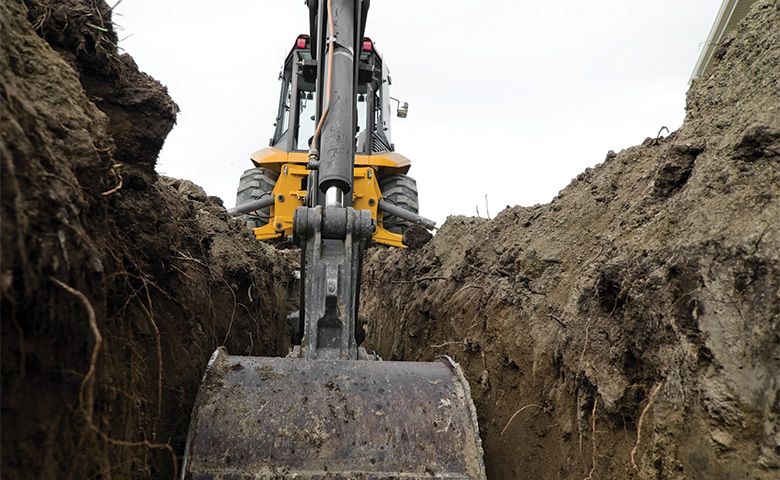 In the seven years since receiving that less than 10-minute overview, I had learned a lot. In fact, I was even responsible for training other people on my job sites. On this particular site, I was working with two 17-year-old laborers—both inexperienced and with their own reasons for being there—but learning the trade was not their priority.

In order to save money, the customer decided they would have their plumber supply the four-inch pipe for the job. My boss gave them the approval to do so on the condition that the pipe was delivered to the job site before we got there. But when we arrived that morning, the pipe wasn’t there and I was livid.

I jumped into the pipe truck and sped over to the site office trailer to tell the foreman that we were leaving to go to another job that was actually ready for us because they obviously weren’t. The foreman managed to calm me down and assured me that the pipe was on its way and would be ready when I needed it.

Against my better judgment, I went back to the site and began work. I let the laborers install the six-inch pipe we brought while I dug the trench for the four-inch pipe that wasn’t there yet. Two hours passed as I sat with my open ditch waiting for the pipe that was “on the way.” In order to turn a profit, we needed to complete two basements a day. I went into a tailspin thinking about how in two hours I should have had all of the pipe in the ground and backfilled, which would have completed three-quarters of that basement. I knew that if I wasn’t making money for the company, I wouldn’t be around much longer, so my urgency to get that pipe in the ground was high.

In the seven years since receiving that less than 10-minute overview, I had learned a lot. In fact, I was even responsible for training other people on my job sites.

The plumber finally delivered the pipe. My patience was already low, I didn’t have time for on-the-job training and my laborers were taking what seemed like forever to make a decision on something. I intervened and asked what they needed. They said they wanted to put a bend on the pipe. I knew from experience that they didn’t need a bend but I had no time left to argue with them. I ran and got the only four-inch schedule 40 bend I had on the truck and some PVC glue to affix it to the fitting. They were fumbling trying to get the fitting on and I knew that if the glue set, they would end up losing it. I had no room for error so I yelled for them to get out of the way, jumped into the trench, put a little more glue on the outside of the pipe and inside the fitting and slammed that pipe into the fitting. Just as I was about to scold them on how easy it was, I noticed movement out of the corner of my eye.

About 25–30 feet of the trench wall was moving a little bit. A collapse was imminent. I knew that I needed to get to the very end of the trench because its configuration there causes an arch effect and provides a safe cocoon in the event of a trench failure. Just as I was about to turn and run I realized that both laborers were down in the trench with me and they had no idea what was about to happen. 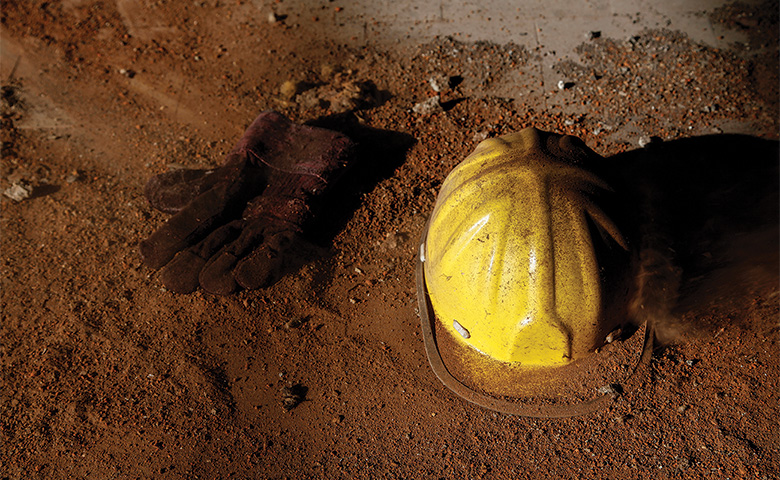 If a six-foot long, four-foot wide, eight-foot deep section of a trench collapses, it can send 10 tons of soil crashing down on a person. Knowing that all three of us were in harm’s way, every second mattered. I shoved both boys to safety against one end of the trench but I was unable to make it to the same area, so I turned to run to another safe spot. I thought I would get away with it because I had done it so many times before without any negative repercussions. But this time I didn’t make it out—I was right at the tail end of the trench collapse and I was buried up to my armpits.

Luckily, I’d succeeded in pushing the boys to safety and they came running down to help me. Right then, my 10-minute safety overview from when I first started in the business hit me, “If the trench caves in but doesn’t kill you right away, just hang tight because there’s going to be a second cave-in. And that second collapse is going to be more catastrophic than the first one—it will be the one that takes you out.”

I was in and out of consciousness, but I remember pleading with myself to stay awake. I knew that if I passed out again I would die because those young boys did not know how to help me. Every time I inhaled, the dirt got tighter around my chest. The only shovel we had was buried in the trench, so one of the laborers, who was 6’6” and 300 lbs, grabbed my wrists with the intention of pulling me out by my arms. I knew that with the weight of a car on top of me, that action would have ripped me apart. I yelled for him to stop and explained how they could carefully dig me out with their hands instead. They did and as soon as I could move my legs I was scrambling to get out.

We didn’t have 911 service or cell phones back then, so my ambulance was a 1978 Chevy Pickup. I was in and out of consciousness the whole ride to the hospital. But whenever I was conscious, I was self-diagnosing my injuries. I determined that I probably had a broken rib or two and I’d be home by dinner.

When we got to the hospital I managed to take two or three steps towards the emergency room and the next thing I remember is my toes dragging across the parking lot. I woke up again to a nurse taking my blood pressure. “He’s 60 over 40,” I heard her say to the other nurse. I must have put my stethoscope back on because I went back to self-diagnosing. I knew that my blood pressure wasn’t supposed to be 60/40, so my initial diagnosis must have been a bit off and I probably wasn’t going to be home for dinner.

If the trench caves in but doesn’t kill you right away, just hang tight because there’s going to be a second cave-in. And that second collapse is going to be more catastrophic than the first one—it will be the one that takes you out.

Here’s the part of the story I can’t tell you first-hand because I learned about it later: by the time the attending physician made it into the emergency room that day, I had flatlined. My self-diagnosed broken rib was actually internal bleeding that required surgery and my left kidney had to be removed in order to get me stabilized. Over the next 48 hours, I only remember the last 30 minutes of every four-hour interval because that was when the morphine wore off. I was completely out for the first three and a half hours and then I was in excruciating pain for that last 30 minutes until they gave me my next shot of morphine at the four-hour mark.

Aside from the physical consequences that include three bulging discs near my sciatic nerve, the results of which I can only describe as feeling like you’re walking on the sharp end of a sword instead of a leg, it’s the emotional consequences that are the worst. You could set a clock to when I wake up screaming from recurring nightmares, but they are nothing compared to the emotional damages this accident caused my family. Every time I left for work, they feared I was never coming back. If I was ten minutes late walking through the door, the house was in hysterics.

For years, after I went back to work, I spent every safety training class searching for the answer to how my accident happened. I was the last person this should have happened to—I was considered one of the safest operators in town. I was competent in my job. I had trained a lot of workers in safety. As the operator-foreman, my job was to stand up top and watch for signs of a trench failure. I knew the risks. So why did this happen to me?

It wasn’t until I had taken some human factors training that it clicked for me. Your state of mind can greatly impact your critical decisions. I knew the hazards but I wasn’t in tune with how complacency and other states of mind can impact safety. I had a happy ending to what could have been a tragic story, but if I’d known how to prevent the errors caused by my mental state, this incident could have been avoided.

You may never get caught in a trench collapse, but the tasks of your job and the risks you face at home or while driving can still cause serious physical injuries and leave lasting emotional effects on you and the ones you love. My accident could have been prevented and so can your future accidents. Because protecting people through engineering solutions is a basic requirement, but how can they be protected against their own state of mind? If there’s one lesson I took from this and want to share with you it’s this: learn more about human factors training—it could save your life.

Joe Tantarelli teaches people about human factors as a Safety Consultant with SafeStart. In his 40 years in heavy equipment construction, he went from laborer to operator to manager. Joe was a training specialist for over eight years which provided a natural transition for him to become a speaker and implementation specialist. 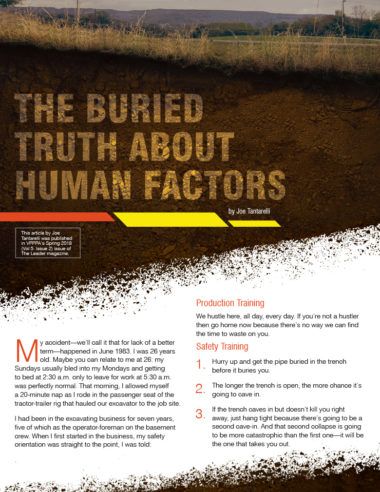