One of my favorite questions to ask at the beginning of a safety training session is, “Are you getting paid to be here?”

The answer, by the way, is always yes 100% of the time. Then, I ask them if they feel additionally motivated not to die accidentally because they’re on the company clock. It always gets a laugh. Not too surprisingly, it’s the same answer for being dismembered or mangled up.

Apparently, we aren’t all that fussy about the when, where or how we die or become disabled. We just don’t want it to happen anytime or anyplace. Few things could be more obvious or self-evident. And yet, how often do we talk to employees about safe driving? If we do, are we tracking any improvements? Do we even come close to giving it the same attention or treat it with the same importance as we do for workplace safety?

No, but the statistical risk of dying accidentally is 10-20 times as high as it is in the workplace. Note: an easy way to get this across is to ask a group of employees, “How many of you have been to a funeral for someone who was killed in a motor vehicle accident?” Usually, about 80-90% will put up their hands. Now ask, “How many of you know someone personally who’s been killed in a workplace incident – not just here, but any place you have worked?” 50-70% of the hands will drop.

But how often are we talking about home safety? Add it all up and the risk of dying accidentally is 17-27 times higher off-the- job than on. These proportions alone would be enough to explain why people might get a bit turned off to workplace safety messaging. “It’s your safety we’re concerned with, your safety is our #1 priority, it’s your safety we care about…etc, etc.” But the workplace isn’t where their real risk is. The risks aren’t in proportion. Or, if you will, the proportions are on our terms – not theirs. We over-emphasize our concerns and under-emphasize theirs.

The lack of concern for off-the-job safety is cavalier at some workplaces – “Who cares, it’s not our responsibility…” and curiously quizzical at others – “We really don’t know what our off-the-job injury rate is …we don’t track that sort of thing…” Some don’t even want to take a blind stab at guessing what it might be. Ironically, since most large corporations are self-insured, it’s not that big a deal to get this information/data. They just didn’t think to do it. Imagine finding out it was 28 times higher than the on-the-job rate.

That’s more than just pushing on the wrong end of the lever – it’s more than just a lost opportunity, it also might look conspicuously like you don’t really care whether they get hurt off-the-job or not, which isn’t true.

We do care, if not from a humanitarian point of view (which is rarely the case), then at least from a financial perspective. All injuries that require medical treatment cost money. The average cost per American is approximately $2000 a year or $5100 a family.

25,000,000 Americans will require medical attention from a doctor or emergency ward each year provided things keep going as they’ve been going. That means that 1 in 12 will need medical treatment for an injury (versus illness) every year, or everybody every 12 years. So, off-the-job injuries are costing your company a whack of cash, but nobody’s talking about that either (in most cases disability claims management isn’t part of the safety department).

However, some risk management departments are. They are looking at the total picture. All the exposure, all the costs and, as you can imagine, the workplace safety/workers comp proportions aren’t the biggest. But do the Risk Managers come to the safety people for ideas to improve off- the-job safety? Sometimes, but most of the time nothing is being done, or next to nothing. Rarely do you hear of corporate goals to reduce off-the-job injuries by 20% this year. Whereas, those types of goals are ubiquitous in the occupational health and safety world. Yet the messaging continues, “But we care about your safety, it’s your safety we’re concerned with…”

Heck, even if we weren’t, we should at least be concerned about the money. As safety professionals, we should know what the dollar figures are and where they’re trending. We should also know what to do about them. We should know how to get the off-the-job injuries down. We should be there to suggest something that would be worth investing time, money and effort into. Something that provides a sizeable return on investment. Even better, would be something that’s guaranteed to work which, by the way, will mean more than giving them safety glasses for their kids when they’re mowing the lawn. That kind of stuff will only get you so far.

Now it could be something like teaching them how to train their families on Job Safety Analysis or Pre-Task Risk Assessment – it could. But it’s unlikely anyone’s going to have much success with that. It could be getting them to take a behavior based safety approach home with them. “Honey, would you like me to give you a little feedback on your at-risk behavior while you were making dinner tonight?” It could. But so far it’s never been done (at least not by anyone who’s still married).

So, what can you give your employees that will improve home safety and driving safety, that will work – and be worth investing time, money and effort into? Well, let’s go back to the beginning: safety on their terms. Obviously, safety on their terms has to relate to their overall risk exposure 24/7. But what are those risks? Exotic hazards, extremely high amounts of hazardous energy – like we find in the workplace – or are they much more mundane and “low-tech” e.g. loss of balance, traction or grip? As we all know, the risks aren’t high-tech at home any more than the injuries at the workplace are. In fact, for all of the exotic hazards we have in the workplace, most workplace injuries are very low-tech as well e.g. slips and falls is usually the #1 or #2 cause of recordable injuries at most sites.

This does not mean that low-tech injuries aren’t serious. They are statistically among the most lethal, e.g. falling asleep at the wheel is estimated to cause 25% of the fatal motor vehicle collisions. No, “low risk” injuries (didn’t see it, wasn’t thinking about it, lost my balance, etc.) can often be serious. More importantly, they’re everywhere – and they’re happening all the time. And in most cases, they are not from a lack of knowledge. We all know that red means stop, green means go and yellow means caution (in most states). But if we didn’t see the light because – for whatever reason – we weren’t looking… we didn’t stop. The problem with “low risk” injuries isn’t ignorance or a lack of information about the hazard. The problem is keeping the hazards in mind and in sight (eyes on task and mind on task).

Basically, there are four critical errors that increase the likelihood of contacting some hazardous energy or of having that hazardous energy contact you. The first two have already been mentioned, eyes not on task and mind not on task. These first two usually set up the second two, which are: moving into (or being in) the line-of-fire, or somehow losing your balance, traction or grip. These last two are usually the ones that put you in contact with the hazardous energy. These four critical errors are involved in over 90% of all serious acute injuries on or off-the-job (excluding contact sports). In fact, most people can’t think of one time in their life when one or more of these critical errors wasn’t a contributing factor in their injury or close call.

Four mistakes or critical errors. That’s it. Surely it ought to be easy enough to hone in on these four errors, teach people about them, train them on anything they maybe didn’t know already – as it relates to these four errors, (e.g. kinetic energy is a velocity squared function) and thereby reduce the number of injuries these errors cause.

It is easy enough.

But it’s not quite that simple. You see, critical errors are really just a subset of all the errors and mistakes we make. Since none of them are intentional (we’re never trying to make any mistakes), we have to be willing to tackle error – all human error – head on.

We have to look at what causes people to make all kinds of mistakes, not just injury-causing mistakes. At first glance, this may seem like a daunting task. Most people will make over 500,000 mistakes before it’s game over/lights out. But most of the mistakes will simply waste our time, waste our money or embarrass us. Only a small percentage of our total mistakes will actually get us hurt or increase the risk of injury.

Since we’ve all made so many mistakes so far this lifetime, getting people to tell you what causes mistakes is easy. They’ll freely tell you that rushing, frustration, fatigue and complacency cause people to make mistakes. They also point out other states such as: extreme joy, extreme sorrow and panic. But they’ll easily concede that extreme joy, extreme sorrow and panic aren’t very common states to be in. Whereas rushing, frustration, fatigue and complacency are daily. They are also not limited to the workplace or work day. We are not strangers to those four states on the highway any more than we can say we are never affected at home by them. And they can’t be whisked away with platitudes like “Our work is never so urgent or important that we cannot take the time to do it safely…” That might be realistic or “hopefully realistic” as it relates to rules and procedures, but rushing is more than simply “cutting corners”. Rushing is, quite simply, going faster than you normally go. It’s going to happen. And so is fatigue, frustration and complacency.

But here’s the key. We’re usually in a rush or tired, etc. for a period of time before we make an error. Sometimes, even though we’re rushing or frustrated, we don’t make any errors at all. But we’re usually in the state for a period of time before we make the error. Since there are only four critical errors, if we could just get people to quickly think about not making one of these errors whenever they notice that they’re in one of these states, they would be much less likely to make one of these injury-causing errors – anywhere, anytime, on or off-the-job. In all, there are four critical error reduction techniques that people need to learn. (See Figure #1)

This type of training skill is different than information about a hazard or how to read a label/MSDS. Skills require practice or repetition. Since skills are acquired over time, it’s best to spread this type of training out over a period of time (5-10 weeks).

However, once the people learn these skills, they can apply them anywhere, anytime.

Now that would be safety training that anybody would appreciate. Something simple, that was efficient (over 90% of all serious acute injuries), that’s free – it won’t cost them any money, and that they could use anywhere: at work, at home and most importantly, on the highway.

So, if you want people to “buy-in” to your safety program, most likely you are going to have to buy-in to their safety program. Or, if you will, you’ll have to give them safety training on their terms, not just yours. 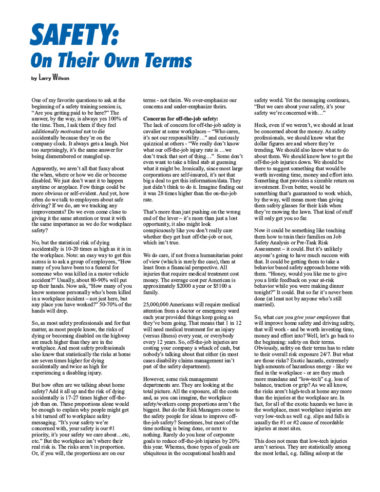