We all become complacent with the hazards we have to deal with on a day to day basis.

To answer the first question, “How often is complacency a factor?”, it’s probably best to just think about yourself and the times you’ve been hurt because you know whether you were thinking about what you were doing or not. Most of us (as adults) have been hurt thousands and thousands of times, if you count all the bumps, bruises, cuts and scrapes, we’ve experienced.

Granted, 70%–80% of these happened before we were 12 or 13, but most adults are still hard pressed to go a month without a visible bruise, cut or scrape. So, even if you’re only getting hurt about 20 times a year, that’s still hundreds (or thousands) since you’ve been old enough to remember the contributing factors. Now, just ask yourself, “How many times have I been hurt when I was thinking about what I was doing and the risk of what I was doing at the exact instant when I got hurt?”

If you’re like most people, the answer is zero or very close to it! To give you an example: out of the 1270 linemen I asked this question to, I only got 2 examples—2 instances out of 1270 lifetimes. Or, given that the average age was 40–45, that’s only 2 instances in 50,000 years. So, for all intensive purposes you can probably count on complacency being a contributing factor (major or minor) in virtually every acute injury you and your employees have ever experienced on or offthe- job (excluding contact sports). Perhaps more importantly, since 10–20 times the number of people are killed on the highway than in the workplace, how often do you think complacency is involved in motor vehicle collisions (major or minor)?

So, complacency leading to mind not on task is huge. But how do you fight it? Many companies are aware of the problems complacency causes but the strategies they adopt to fight it are questionable in some cases and laughable in others. “We tell our employees not to become complacent”, was the answer a corporate safety director gave me when I asked him about it. He might as well have said, “Try not to get any older while you’re at it.”

We all become complacent with the hazards we have to deal with on a day to day basis. Once you get used to the way things are, it’s hard to treat the hazards with the same fear, apprehension and respect you did initially. Once things seem normal to you, once the fear and apprehension are no longer pre-occupying or totally pre-occupying, it’s easy enough for anybody’s mind to wander. . . just think about driving. When you first started to drive, going 60 mph was totally preoccupying (I didn’t even want the radio on the first time I was behind the wheel going 60).

And that’s another problem with complacency. If you’re still scared, fearful or apprehensive about the hazards, you don’t think the problems that complacency cause will ever happen to you. When you tell a 16 year old who is “white knuckling” the steering wheel at 60 mph that “you will most likely fall asleep at the wheel at least once in the next 5 years”, it’s hard for that kid to believe. He or she is still pre-occupied with operational competency issues e.g. parallel parking, over-correcting, etc.

So, how do you fight complacency? Well, if everything seems normal to you, then you have to ask yourself if what you’re doing normally or automatically or habitually is safe. For example, moving your eyes before you move your body, hands, feet or car. Testing your footing when getting out of your car before you commit your weight to it, etc. In other words, we have to get people to put some effort into improving some of their habits.

This is one of the things a well-run observation and feedback process can really help with. Through rote observation and repetition, most people (the ones who participate) eventually improve some of their work habits like wearing PPE and some of their personal habits like lifting safely, eyes on task, etc. Sure, it takes a couple of years since you’re only being observed for 5 minutes once a month or twice a month. But eventually habits improve and injuries decrease.

In other words, in order to fight complacency you have to do something actively that gets you thinking about the hazards and risks of the task/job. The key is active involvement on the shop floor. Active involvement and participation at a safety meeting is good (don’t get me wrong), but it’s not the same as meaningful safety related activity where the work is and where the hazards are. This is one of the reasons that many companies (thousands of worksites) have adopted an observation and feedback/behavior-based safety process.

But observation and feedback processes are not everyone’s cup of tea. And they aren’t going to work at all for people who work alone or drive mostly by themselves, e.g. commuting to work 45 to 60 minutes each way.

However, if you start watching other people for the state to error risk patterns (see Figure #1), then every time you see it, it will automatically pull your mind back into the ball game. Just think about seeing someone reading a newspaper or looking at a road map while driving. If you happen to see someone beside or close to you doing something that is distracting/dangerous what would you do?

But here’s the thing—if you didn’t look over and see the newspaper or road map in the first place for whatever reason (on the cell phone?), you wouldn’t be nearly as likely to take yourself out of the “line-of-fire”.

Watching other people for state to error risk patterns does two things: 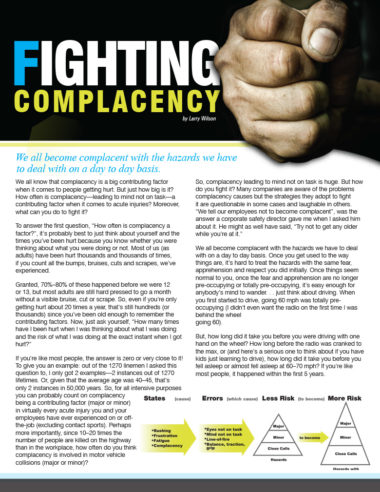