This article by Larry Wilson originally appeared in the
September 2001 issue of Construction & Engineering Safety Magazine.

Although thousands of companies worldwide have dramatically reduced their injuries, improved participation levels in safety programs and improved employee morale by implementing a behavior-based safety process, the construction industry has been reluctant to follow suit.

Why? There are two main obstacles to running successful behavior-based safety processes in construction environments.

Unless these problems are overcome or sidestepped, it will be a long time before behavior-based safety is as common in the construction industry as it is in other industries.

This is not to say that there have not been successes. One construction project at a power plant went 18 months without a serious (lost-time) injury, with more than 2,000 workers on the project. Another construction company had a lower injury rate for a 3-year project than the host petrochemical company.

So it is possible to have successful behavior-based safety processes in a construction environment. And although there is no methodology that is guaranteed to bring success, here is what some construction companies have done:

Mistakes that cause over 90 percent of injuries are the following:

There are also human factors that contribute to errors. The four states that cause more than 90 percent of the four critical errors above are:

While mistakes will happen, it is possible to teach people to recognize when they are in one of these four states before they make a critical error.

There are four techniques to reduce critical errors:

Training employees to handle critical errors and then following up with on-the-job observations drives injuries down dramatically and swiftly. Some companies report injury reductions of 80 percent within four months, although typical reductions are 60 to 90 percent within a six- to twelve-month period.

What about cost? Even if this process does work fast enough, it is still expensive and time consuming ($50 per employee, 5 x 1.5 hours per training session). However, injuries and incident investigations are also expensive. If injuries are reduced, the money saved will more than pay for the training, wages and fees. As one general contractor said, “I would rather pay for the training than pay for the injuries, damage and delays…” 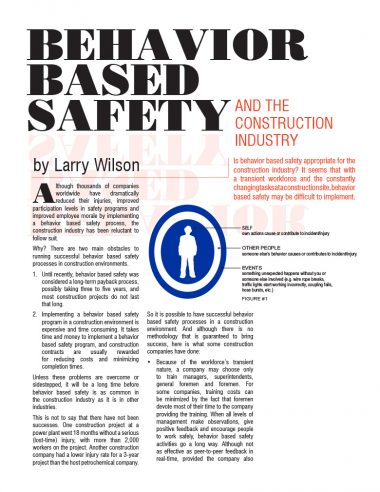