This article by Larry Wilson appeared in the
April 2005 issue of Occupational Health & Safety.

We know mistakes will happen. It makes sense to look at the efficiencies that safety technology offers. 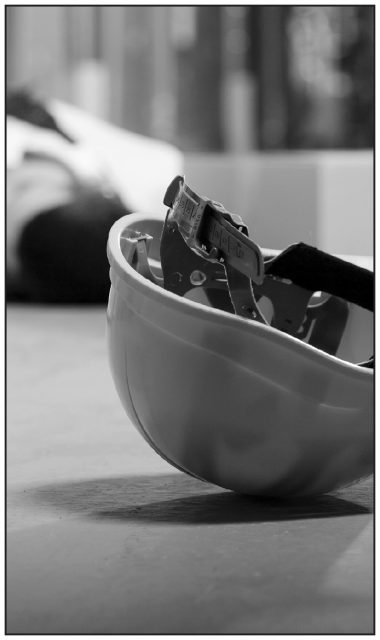 Perhaps it is the everywhere and forever part that’s missing from a lot of the current theory regarding industrial accidents and injuries.

Moreover, if you consider all of the cuts, bruises, bumps, and scrapes young children have, you’re looking at billions of injuries every day. The problem with “All injuries can be prevented” is that in order for this statement to be true, everybody would have to be watching what they were doing and thinking about what they were doing whenever they were moving. Because once they move or start to move, the only thing that tells them what they could be moving into is their eyes or their mind, with the exception of planes and ships that also use radar and sonar.

But most of us aren’t using radar or sonar when we are walking, working, or driving; we’re using our eyes and our minds, though none of us do it 100 percent of the time. Or, to put it another way, if we had to prove it, none of us could prove we have been doing it 100 percent of the time throughout the entire course of our lives. (All of us have been hurt thousands of times, if you count all of the bumps, bruises, cuts, and scrapes.)

To err is human

“But anyone can make a mistake…” How true. We all have made, let’s just say, lots of mistakes. (Some people have been married more than once, some more than twice, some more than three times, etc.) Perhaps some people make fewer mistakes than others, but everyone makes mistakes. And everyone has made injury-causing mistakes and errors such as eyes not on task and mind not on task. We have moved (unintentionally) into something that hurt us. How badly we got hurt is usually a function of luck, the amount of hazardous energy involved, and whether or not we got a chance to benefit from a reflex action. You could argue that all injuries, as they relate to people being in the line-of-fire, are preventable.

Realistically, it is feasible to keep all forms of hazardous energy from hitting people. We do have the technology. But to argue that it’s realistically feasible to guard or somehow negate all of the hard or sharp surfaces in this world so that people cannot move into them, if (or when) they’re not looking where they’re going, is ludicrous. Furthermore, it is just as unlikely that no one is ever going to lose his balance, traction, or grip and fall onto something hard or sharp.

Perhaps some people make fewer mistakes than others, but everyone makes mistakes.

So, for as long as people have been around, they have been making injury-causing errors and getting hurt. Therefore, in order for all injuries to be prevented, everybody would have to stop making injury-causing errors at all times. All of us would have to be watching what we’re doing and thinking about what we’re doing every time we moved, took a step, set our hand down, turned a corner, climbed some stairs, stepped out of the car, opened a door, grabbed a tool, pushed a button, hit the brakes, or turned the steering wheel. Every time.

It’s easy to see why “All injuries can be prevented” is unlikely to turn into “All injuries have been prevented” any time soon. To put it another way, let’s not get rid of the ambulances and fire trucks just yet. So people are going to get hurt. It’s worth betting on. And some of those injuries will be a direct result of people making injury-causing errors such as eyes not on task, mind not on task, moving into the line-of-fire, or somehow losing their balance, traction, or grip.

Even though there is not some kind of daily requirement or quota that we make mistakes, we know it will happen. It makes sense to look at the efficiencies that safety technology offers. An eight-year-old boy was asked, “How much less do you think we’ve reduced the chances for Erin (a two-year-old) not getting a fatal head injury by putting this rubber mat down over the patio stones at the bottom of the porch stairs?” “About 75 percent,” he replied. The response surprised his father because he didn’t think the boy understood percents, let alone safety/risk efficiencies. But the story does illustrate just how easy it is for almost anyone to see the efficiency of certain safety controls and devices. Seat belts reduce the risk of a fatal injury 50 percent—that’s efficient.

However, as efficient as some of these devices are, they are not perfect: You can die in a car crash with your seat belt on. And, in some cases, it just isn’t practical; you can’t put a rubber mat down on every hard surface in this world. There isn’t enough rubber for this, not to mention what the neighbors might think if they visit and see all of the rubber rooms in your house.

We can’t efficiently re-engineer the whole world so that nobody could ever be hurt if or when they make an injury-causing error. And we will keep on making mistakes because we’re human.

While human error might be inevitable, that does not mean there aren’t necessarily efficiencies we could be taking advantage of. In other words, we may not be able to keep people from making “no mistakes at all,” but that does not mean we couldn’t help them make significantly fewer mistakes (and significantly fewer injury-causing mistakes) simply by attacking human error “head on” and using the Pareto Principle. 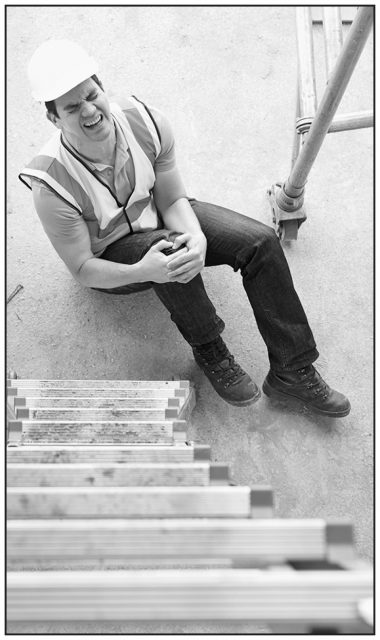 What causes people to make mistakes? The answer is easy: Lots of things, e.g., rushing, frustration, fatigue, complacency, panic, ignorance, extreme joy, extreme sorrow, etc. Which one causes the most mistakes? (Or, to put it another way, which states are most people in most often?) More than 10 years of formal, informal, and innovative study concluded what you probably knew already: It’s not Christmas every day, you’re not going to a funeral every day, and, with any luck at all, you’re not running out of a burning building every day. But rushing, frustration, fatigue, and complacency are states we find ourselves in almost every day. It is actually quite normal to be in each of the four states at least once every day.

What about ignorance? How often is it a factor in acute injury causation? Not very often, surprisingly enough. Note: If you’re skeptical about this, just think about the thousands and thousands of times you have been hurt. Ask yourself how many of those occurred because you didn’t know something. Now, think about how many times you’ve been hurt because you were in a rush, tired, frustrated, or complacent.

All we need to do is help people to recognize when they’re in one of the four states, and then they’ll be much less likely to make any mistakes, including injury-causing mistakes. Granted, there is more to implementing this type of training than mentioned here. But from a company’s point of view, there is a great deal of efficiency in doing whatever it can do to minimize rushing, frustration, fatigue, and complacency from an administration/systems perspective and in teaching these critical error reduction techniques to their employees. They’ll get hurt less and will make fewer quality errors.

For instance, a plant for a major auto parts manufacturer in Mexico won its company’s gold (highest) award for both safety and quality last year. Officials there attributed a large part of their success to having implemented these concepts. This is especially impressive when you consider that most of this company’s manufacturing operations are in Canada and the United States.

In countries that don’t have public health care, there is even more efficiency (or cost effectiveness) in teaching these concepts to employees, because then the employees can take these concepts home to their families. One way or another, the company pays for all of the off-the-job injuries to that employee and to any member of that employee’s family. Any trip to the doctor or hospital that is prevented saves the company the cost of the visit/treatment.

You can significantly reduce the number of injury-causing errors people make, both on and off-the-job.

One large manufacturing site in Iowa saved $7.1 million in off-the-job injuries in a five-year period just by introducing these concepts to its approximately 2,700 employees.

Can all injuries really be prevented? In short, the answer is no. Even if you could prevent all of the (different forms of) hazardous energy from hitting people, you cannot stop people from moving into hard or sharp things. However, you can significantly reduce the number of injury-causing errors people make, both on and off-the-job, efficiently and cost effectively. And you can do it without having to make everybody live in a rubber room. 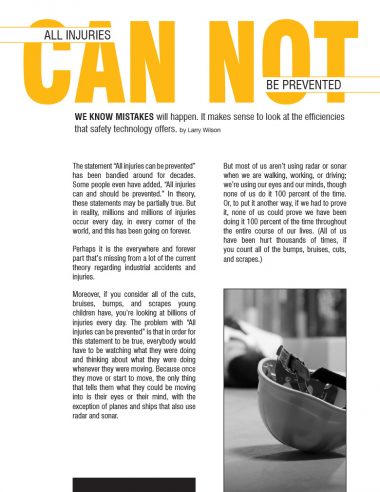