Hopefully by the title, you realize we must be talking about acute injuries as it’s very difficult to kill yourself from doing too many key strokes or mouse clicks per day. Or, if you think of the highway—where there are 10–20 times more accidental fatalities than in workplaces or factories—it’s easy enough to hurt your back if you’ve got a bad car seat and you drive a lot, but it’s unlikely that the bad car seat will ever kill you. So, the answer to the first question, “Are we talking about acute injuries or repetitive strain injuries?” is easy.

We’re talking about acute injuries. However, the important question, “What really causes acute injuries isn’t so easy to answer. Moreover, what if the answer or the truth is much different than what we’ve been taught? And finally, how do you know—or how do you prove—that it is the truth or that it is reality? The answers to these questions took me about 15–20 years. So, as mentioned before, not nearly as easy an answer to come up with.

Let’s start with what you knew before you ever started working or working in the EH&S profession. You knew how you had been hurt. And you knew when and how often— although you might not remember much below age 6 or 7. Then, you learned about occupational health and safety including the legal aspects and compliance issues. Probably the importance of management “commitment” was stressed. Then we learned about unsafe acts, unsafe conditions, risk pyramids and multiple factor accident causation models.

Question:
How many unsafe acts does it take to cause a fatality?

And when we learned about all of this (in my case, 20 years ago), did we hear about how an employee’s “attitude” causes these deliberate unsafe acts? And how these unsafe acts caused over 90% of the workplace injuries? Unfortunately, a lot of us did hear this, and we heard it over and over. And we heard it from lots of people (although very few people around today ever heard it from Heinrich himself).

Now, one of the problems with hearing things over and over—from lots of different “experts” is that pretty soon some people stop questioning what they’re hearing. Even if what they’re hearing is different from what they know for sure: how and when they got hurt. Which is understandable (or forgivable) because while we may know exactly, for sure, definitely, etc. how and when we’ve been hurt—we know that our own personal injuries are only a small number compared to the millions and millions of injuries that occur every day around the world (if you count all of the cuts, bruises, bumps and scrapes). And just because we know for sure, exactly, definitely, etc. what got us hurt, that doesn’t mean that’s how everybody else got hurt. Personally, I thought everyone else got hurt like the models said, but that my injuries—for whatever reason— just didn’t fit. But that was “acceptable” too, because I really didn’t “work” for a living—I just “talked”. Granted, I had to fly a lot and drive a lot, but somehow I thought that was “different” because I wasn’t doing the type of work that the models were based on…In other words, I had no problem accepting that I was an “exception to the rule” because I did “different” work…

Until the day I nearly killed myself falling asleep while driving back from a generating station in the middle of nowhere. Model or no model, different or not—dead is dead. And I had to accept that. Human error could kill. I had just proven it. And yet I had never heard anyone in occupational health and safety talk about human error. All I had heard about was unsafe acts, unsafe conditions and attitude.

But all that was about to change because in the ‘90s, attitude wasn’t the problem any more. It was behavior. Behavior became omnipotent and attitude wasn’t so important any more. At-risk behavior had replaced unsafe acts and attitude—but in name only. Hardly anyone talked about the three different types of at-risk behavior. Most people were still referring to deliberate conscious decisions workers made to increase risk or conversely, not to decrease risk. They weren’t talking about the other two: habitual atrisk behavior (automatic) and unintentional atrisk behavior (error). How important are these two types of at-risk behavior? How often are they involved in acute injury causation?

To answer these questions, we need to look at the basic components or factors that need to be involved for an accidental injury to occur:

Ok, so which of those three areas is the largest, or will be involved in the highest number of incidents and injuries? Well, after thinking about it for a while, most people will “freely” admit that the “Self-area” will probably be the largest. But until you get them to think about what they know for sure, definitely, exactly, etc. which is how they have been hurt—both on and off-thejob— they will have a hard time estimating it as high as it really is.

I have done this exercise with over 100,000 people and the “Self-area” is approximately 99% (not including contact sports).

So for the most part, people (adults and children) hurt themselves. Over 99% of the time it wasn’t the other guy or the equipment that initiated the chain reaction that caused the incident or injury. If you’re skeptical—make sure you count all of your accidental injuries, including cuts, bruises, bumps, slivers and scrapes (approximately 5–10,000 for most people).

Now, if 99% of the times you’ve been hurt, it was something unexpected that you did—like not seeing the stop sign or losing your balance— how often do you think human error is involved in accidental acute injuries? 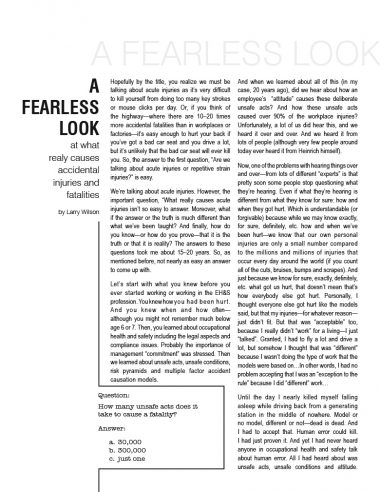