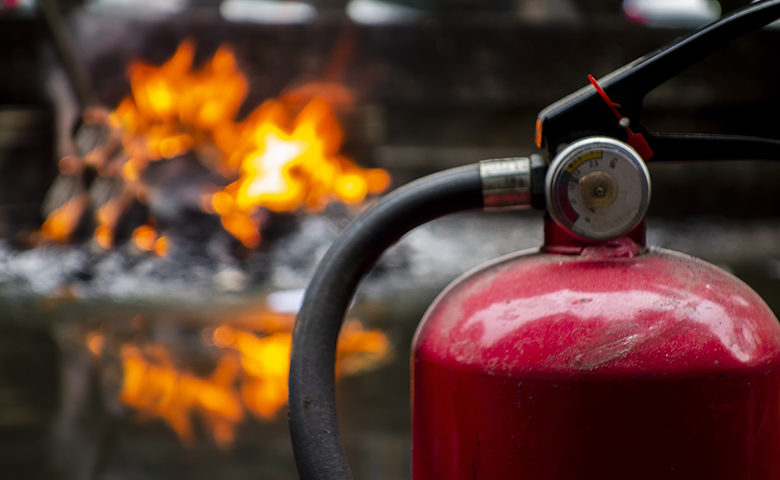 When a fire breaks out, people often panic and grab the nearest fire extinguisher in hopes of containing the blaze. But using the wrong fire extinguisher could actually make the fire worse, causing it to flash and result in serious injuries. This is why it’s important to train employees on workplace fire safety procedures.

The best way to help workers recognize which fire extinguisher to use is to teach them about how fires are classed:

Multi-purpose (dry chemical)—removes the chemical reaction of a fire. This is the most common fire extinguisher because it’s recommended for class A, class B and class C fires. These red fire extinguishers can be seen in a range of sizes and are found in a variety of locations (office hallways, break rooms, vehicles). Travel distance from extinguisher to hazard should be less than 50 feet, which is why you see several multi-purpose extinguishers throughout a building.

Carbon dioxide (CO2 or dry chemical) extinguishers—recognizable by the large hand horn (the pressure gauge is also missing).  This type of extinguisher replaces the oxygen in the fire with carbon dioxide, and it’s good for class B and C fires but not recommended on class A fires because the fire can reignite after the CO2 dissipates. It’s most commonly found in computer server rooms, and the distance between the hazard and the extinguisher should not be more than 50 feet.

Air-pressurized water (APW) extinguishers—recognizable by its large silver container. Sometimes a foaming agent is added. The water removes the heat by cooling the surface of the fuel and the foam removes the oxygen. This type of extinguisher is recommended for class A fires. A water-based fire extinguisher should never be used on flammable liquids (class B) or electrical (class C) fires since water is a conductor and will cause the fire to spread instead of putting it out. Travel distance to the hazard should be less than 75 feet.

If you don’t already have one, it’s important to develop a fire prevention plan. Outlining the procedures (like calling 911) to implement in a fire could be the difference between a small fire that was contained through intervention and a catastrophe. It’s also important to debunk any common misconceptions employees may have. This will emphasize training requirements, and help to further develop evacuation plans. Portable fire extinguishers should be inspected every month to make sure the extinguisher is charged and in good working conditions, free from any obstructions and has not been tampered with or damaged—adding this to the regular inspection list is vital.

When a fire breaks out, employees who have been through human factors training will have several skills that will help them respond appropriately. In particular, they will know how to keep their sense of rushing and frustration in check, which will allow them to think clearly about the type of fire they’re dealing with. Ultimately, workers who know how to deal with human factors are more likely to use the right type of fire extinguisher to put out the fire.

Which Change Management Model Is the Best for Your Organization?
Is Your Safety Calendar Meeting Its Potential?