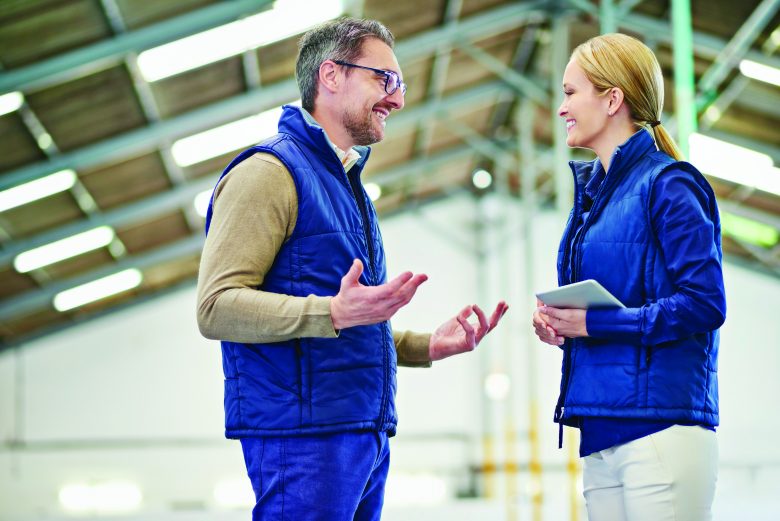 Safety is not always the easiest or most inspiring conversation topic—but it can be. It all depends on the attitude of the participants and on their ability to have an effective exchange. Because often, the way people view safety will be determined less by the message and more by the way it is delivered.

Having timely, effective and frequent conversations about safety is critically important. It can have a significant impact on addressing recurring or new issues, ensuring compliance, fighting complacency and helping everyone keep safety and risk in mind while doing their job. So it makes sense for trainers, safety leaders and supervisors to invest some time in improving their conversations (and their conversation skills) with workers. It might seem that talking to someone is easy, but having a great, insightful and impactful conversation requires certain skills which many people haven’t fully explored or developed.

There are a plethora of books and training courses for developing communication skills, such as Crucial Conversations or The Story Factor, but there are also some tried and tested ways to get any safety conversation on the right track.

Trainers, safety leaders, supervisors etc. should go into safety conversations accepting that they don’t have all the answers. Even if they feel they’re the expert on the topic and it’s their job to teach people about safety, they should always assume that they also have something to learn. For example, knowing why people behave a certain way or ignore certain rules can not only contribute to understanding the workers better, it can also reveal priceless information that could help improve the leaders’ communication skills. Because the more they know about the people they employ or train, the better they are at teaching and leading. So it’s important for them to never go into a safety conversation thinking that they already have all the relevant information.

This is why it’s also important for managers and supervisors to say “I don’t know but I’ll get back to you” when they don’t have an answer to a question. Making up an answer, giving an incomplete one or changing the subject won’t fool anyone. These techniques for “saving face” actually contribute to people looking dishonest and less knowledgeable than they are. Nobody is required to know everything and by admitting to not having an answer is not revealing a weakness, but allowing for a way to finding the answer together. Simply saying: “I don’t know the answer but we can find out” can have a much more significant impact on the safety conversation than making something up on the spot.

The use of open-ended questions should not be underestimated. Asking questions starting with “Are you…”, “Is it…” or “Do you…” is often pointless because the answers will be monosyllabic at best and the other person will not be truly involved in the conversation. Moreover, when faced with questions like that, workers will be more likely to think that there is a “right answer” they’re supposed to give which defies the purpose of an honest conversation. Instead, it’s a good idea to use words like: why, what, how, etc. and listen to the answers. Which leads to the next point.

The art of listening

A supervisor might be the one initiating the discussion, but there is no point in doing it if they’re not interested in the worker’s views, opinions or worries. This interest must show in the most important aspect of a good conversation: listening. And it doesn’t mean listening with the intent to reply, but truly listening to what the other person is saying without assumptions or judgment. Being interested in other people and what they say helps discover more about them and contributes to building a healthy dialogue.

Lectures are not the way

Participants need to be involved and fully engaged in the safety conversation. A manager should never be checking their phone or looking at their calendar while they’re supposed to be talking to someone—the workers deserve their undivided attention. So if the supervisor or manager can’t be fully engaged (for whatever reason), they should reschedule. There is absolutely no point to a safety conversation which one side doesn’t seem to care enough about, and it will not have any positive effect.

Conversations are a little like live creatures; nobody can be sure where they will go. Sometimes a safety chat about one subject can turn into a discussion about something completely different. This is why it’s important to let this happen when it does. If the conversation goes in an unexpected, but important, direction it should be followed there. There may have been a plan and a specific subject to discuss, but if another safety topic is brought up and workers clearly seem to care about it, is there a reason—apart from being fond of sticking to the plan—to not addressing it? Unless the original topic must be discussed that day, there is no reason why it can’t be introduced later to allow the active conversation to continue.

However, whichever topic ends up being discussed, it’s important to clearly communicate a time to come back to the other subject matter. This helps ensure that neither one is allowed to be forgotten or ignored because, if that happens, it sends the message that the subject (the original one or the one brought up by the workers) wasn’t important.

Before wrapping up, it’s important to seek confirmation and ask the workers to summarize the conversation. But the person in charge should be mindful of the language they use. It might seem aggressive and demanding to say: “Repeat what I’ve just said”. Instead, it’s not difficult to ask people what they took from the conversation and what they found important. In their answer, there should be a confirmation that they received the message and it’s also a good opportunity to clarify any discrepancies.

Additionally, it’s a good idea to ask for feedback about the conversation itself to see how well it was handled. Did the workers feel listened to? Did they feel that their time and position on the topic were respected? Their feedback can allow for improvements to future conversations.

Become a Master of Safety Training

The How to Become a Master of Safety Training guide shows you how to improve personal training skills, discover the training principles that offer maximum impact, and learn the secrets of training for relevance and results.