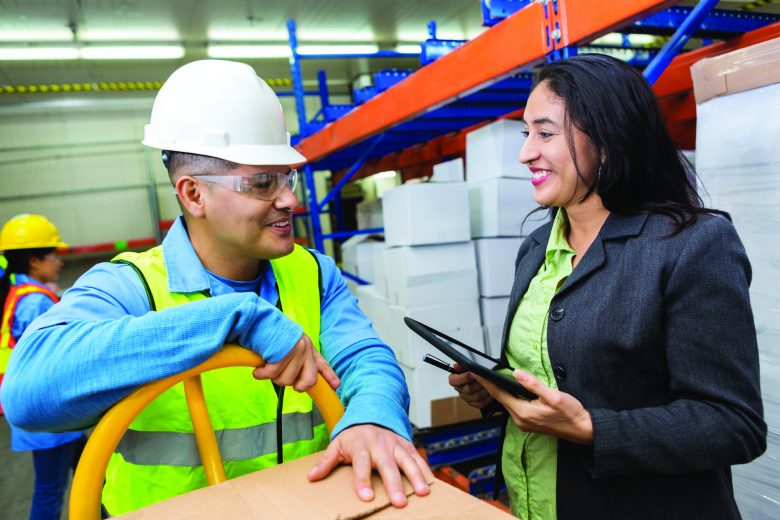 For managers and supervisors on the factory floor or on a construction site, it can be challenging to have positive and meaningful conversations about safety—particularly if the conversation is about risky or complacent behavior.

The biggest thing to remember is often overlooked: it’s never a worker’s intention to put themselves or others in harm’s way. Often their actions—and by extension, their health and safety—are influenced by human factors like rushing, fatigue or frustration. It’s important to recognize that workers may not be aware of this fact.

There are many ways for a supervisor to engage workers without criticizing or blaming them. Here are three key ways to have more positive and effective safety interactions in the workplace.

One useful safety communication technique is to emphasize to workers what they’re doing right before gently encouraging them to consider behaviors that can be improved. It’s important to make sure they know that you’re paying attention to everything they do—not just their unsafe actions.

Remind them that you’re taking notice of their efforts—then make suggestions for how they could improve their personal safety. Studies show that a bit of positive reinforcement is more likely to lead to constructive changes and growth. Conversely, fear tactics are more likely to alienate employees and lower their self-esteem. So rather than be seen as constantly badgering workers, take a praise-first approach to safety conversations.

One exception to this is if you see them doing something that presents clear and present danger to themselves or others, and you need to quickly help them adjust their actions first before you have a discussion. But even in these cases, try to find something they were doing right to balance the corrective measures you had to take.

There are times when providing constructive criticism is the only way to draw a worker’s attention to a safety concern. In these cases, it’s important to situate the conversation in the bigger safety picture because sometimes people can’t fully gauge the implications of their actions. To help them see how their personal safety affects others around them, consider explaining exactly what additional dangers not following protocol can create. Alternately,  tell them a story about individual actions leading to someone else being injured. When workers understand the context or reason for a regulation or rule, they’ll be more inclined to follow it.

When dealing with an employee one-on-one, an in-depth conversation can reveal things about your safety culture you may not be aware of. Having a conversation can create space for an employee to disclose issues they’ve encountered with their tools, machinery or personal protective equipment. For example, listening to workers who mention fatigue can make you aware that certain tasks or jobs require longer breaks. These benefits are only available, though, if you actively listen to workers and seek their input. All too often, supervisors treat conversations like lectures, and the one-sided nature of the exchange doesn’t leave employees with room to contribute.

It can be frustrating to see workers putting their health and safety at risk. But don’t let those feelings seep into your interactions in a way that makes workers feel talked down to or belittled. Provide resources or hands-on correction in an assertive manner that isn’t condescending. It will help workers improve and understand where they stepped out of line and create an open channel for future dialogue.