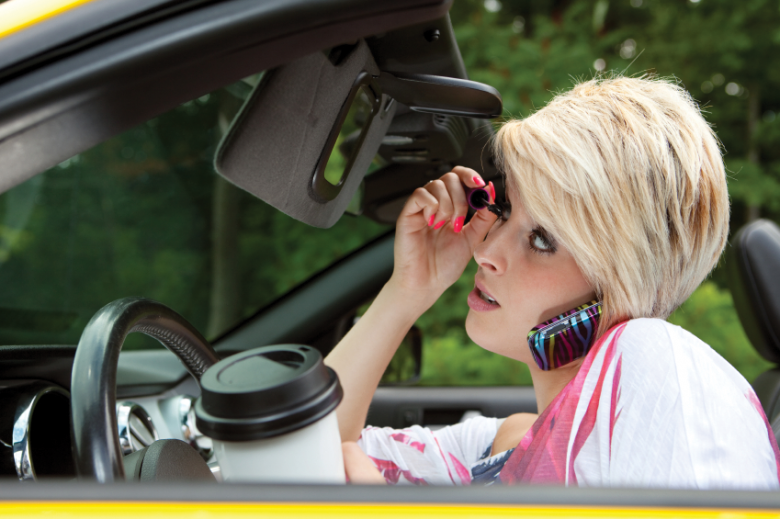 Distracted driving is a terrifyingly common problem. It’s estimated that 10% of drivers are distracted by cellphones at any given moment. And phones aren’t even the biggest cause of distraction.

But nothing has quite the visual impact of ads, public service announcements and other videos aimed at curbing distracted driving. There’s a number of them out there, and they range from funny takes on our inability to multitask to heartbreaking interviews with car crash victims.

After sifting through hundreds of online distracted driving videos, here are eleven of the best distraction-related clips that highlight the problem—and even propose a few solutions.

A car going 60 mph will travel 88 feet per second. That’s a lot of ground—but it can also be hard to visualize.

Australia’s Traffic Accident Commission has developed a 45-second TV commercial to help drivers recognize just how far their car travels when they take their eyes off the road for a few moments.

This video features a chorus of teenagers thanking their parents for teaching them how to tie a shoe, ride a bike, play hockey…and to text and drive.

It’s a powerful statement: children learn behavior from parents and it’s up to adults to be good role models while driving.

Many anti-distraction ads show cinematic, slow-motion car crashes to convey the danger of taking your eyes off the road. But this video is what happens when you strip away the dramatization. It shows the real-life impact of distracted driving on victims—and the effect is profound.

This video is from the National Safety Council as part of their efforts to fight distracted driving. As the NSC points out, “drivers—53% of them—believe if manufacturers put ‘infotainment’ dashboards and hands-free technology in vehicles, they must be safe. But in fact, these technologies distract our brains even long after you’ve used them.”

There is myth that hands-free devices are safe but as this video shows hands-free doesn’t mean risk-free.

The AAA Foundation for Traffic Safety participated in a study that documents teens while driving. Half the screen shows the driver and the other half shows the road. As the young drivers turn their attention to their phones or the car console, you can see in real time as the car quickly careens towards mailboxes, other cars and into fields. It’s a great visual example of how even a quick glance away from the road can lead to a potentially serious incident.

Also on the theme of documenting real examples of distracted driving, this clip is from an episode of Driver Rehab (it runs almost 10 minutes). It focuses on Josh, a driver who likes to text and watch movies while behind the wheel. Seriously. Fortunately, after some eye-opening training on a closed track, Josh comes to see firsthand just how risky it is to mentally multitask while driving.

“The Impossible Texting and Driving Test”

Like the previous clip, this video takes place on a driving track. But instead of trying to break a habit of texting and driving, it forces young drivers to use their cellphones while the car is in motion. As they run over a whole bunch of pylons, the distracted drivers exclaim in frustration, “I can’t do it!” and “People will be killed on the road.”

All the videos on this list so far have focused on the problem. But this hilarious distracted driving PSA presents a rather unorthodox solution. It may create a number of awkward social situations but it could lead to safer drivers (at least when there’s someone in the passenger seat).

This rant is a segment from Canada’s Rick Mercer Report. In addition to providing great turns of phrase like “stupid death by smartphone”, it also offers a common-sense solution (with no handholding required). Rick’s proposal has the added benefit of dealing with the problem of phantom calls—and pointing out how little drivers can be trusted to do what’s right in the moment.

This is an ad about speeding, not distracted driving. There are no cellphones and no one takes their eyes off the road. So what does it have to do with drivers who aren’t paying attention?

The video ends with a simple message: “Other people make mistakes.” The implication is that you can’t control other drivers, but there are steps you can take—like slowing down and paying attention—to mitigate others’ mistakes. (Looking at others for mistakes to keep yourself safe is such a useful habit that it’s a core skill taught with SafeStart.)