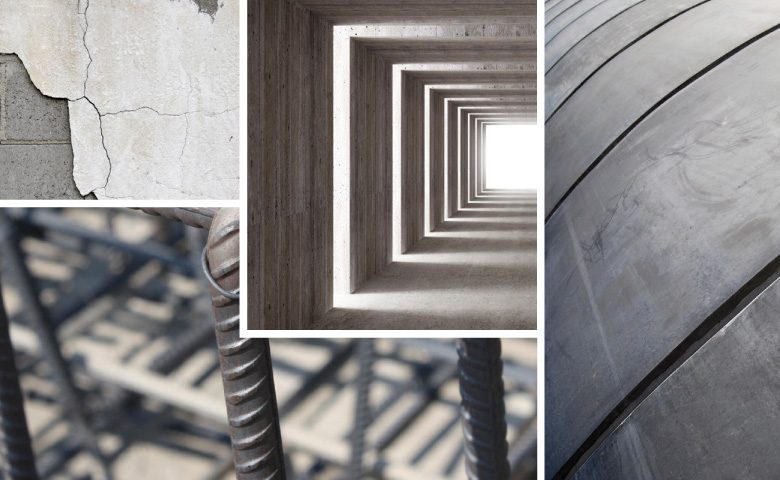 Speed is essential in the concrete repair business and even a single lost-time incident or error could prove disastrous when dealing with huge volumes of quick-setting material. Few are able to keep their workers as safe as Vector Construction does and no one can argue with their success in a crowded industry.

Vector provides concrete repair, restoration and protection services to industrial and civic infrastructure throughout the United States and Canada. With 10 divisions across North America, Vector provides everything from simple facelifts to multi-million-dollar restorations for almost any type of concrete structure.

Each division works on up to 90 different construction projects every year. Whether patching surfaces in a parking garage or rehabilitating a chemical plant, the work environment is constantly changing. From one site to the next the hazards are as varied as they are dangerous, and safety is always a concern for every one of Vector’s employees.

That’s one of the reasons Vector has always strived to stay at the forefront of safety. So when a major client approached Vector to pass on its own successes in SafeStart, the company knew they had an opportunity to improve an already-strong safety culture.

Vector dipped a toe in the water by putting everyone in its Illinois division through the SafeStart program. As soon as they analyzed the results Vector’s executives knew they’d found a way to effectively reduce human factors-related injuries and errors, and within a year SafeStart had been implemented throughout the entire company.

From securing clients to avoiding production slowdowns caused by lost-time injuries, SafeStart gives Vector Construction an edge in a competitive industry. And it’s quickly become part of almost everything they do in the field.

It’s not easy to manage multiple sites—but for Vector it’s just one of the daily challenges of working on projects across North America. So how does Vector keep every employee at every site safe? According to Rylan Page, Vector’s Corporate Health and Safety Manager, the key is keeping it simple.

“We build our safety program into something that’s very easy to use in the field,” says Rylan. Vector conducts a rigorous pre-job hazard assessment before they begin working at a new job site, and every workday starts with a daily safety huddle that identifies hazards in the upcoming work.

Controls are assigned when possible but some hazards are impossible to eliminate. There’s always an element of rushing involved when working with concrete but Rylan has found that highlighting dangers like human factors at the beginning of each day makes workers more mindful and much safer as a result.

Every division also holds a toolbox meeting every week. Workers are engaged in every meeting and come away informed—which is no easy feat. The key to keeping toolbox talks and other safety meetings relevant, Rylan says, is Vector’s keep-it-simple safety mantra that reminds safety supervisors to ensure meetings are easy to follow and relevant to the job at hand.

Rylan has found that SafeStart provides a common language on important safety issues, which helps his workers see how every safety topic he discusses is directly applicable to on-site work. “Every time there’s a training session I’ll always incorporate SafeStart into the language,” Rylan says, and by including SafeStart in daily safety huddles and weekly toolbox talks Vector is able to remind workers about dangers and how to avoid them.

Seeing the SafeStart Difference in Action

Vector’s employees are more proactive than other contractors when it comes to safety and Rylan firmly believes “SafeStart has a lot to do with it.” In particular, SafeStart terminology helps workers identify factors like rushing before they become an issue—and because these factors are fresh in workers’ minds they are more likely to avoid making a mistake because of them. Some other contractors just show up and start working without taking the time to communicate a safe work plan and allow input from their crews.

Often, Vector works side by side with other contractors and it’s not hard to spot the difference. On one job site, Rylan said, there was a contractor “who had a worker who sprained his ankle, another got stitches on his head. They were working with heavy equipment and they knocked the sprinkler system out of whack and broke a pipe.” Vector employees, meanwhile, managed to avoid getting injured or making any of these errors.

The difference, Rylan says, is that Vector’s workers have the skills and language to properly discuss safety issues. The other contractor’s workers “weren’t making a big deal of it but our employees were talking about it while it was happening. We noticed that these guys were having things happen and weren’t paying attention. The fact that our crew noticed what these other guys were doing wrong is a pretty good indication that we’re moving in the right direction.”

In fact, SafeStart has helped his employees become so proactive that Rylan says in some cases “near hits reported in our company were about subcontractors on other sites.”

As a result, Vector’s employees are more alert to the dangers of human factors on the job. It’s just one of the benefits of SafeStart, and it has a positive impact on injury rates throughout the company.

Sharing Stories from Top to Bottom

One of the main elements of SafeStart is sharing safety stories—and from the corporate head office to on-site workers, everyone at Vector takes part.

Video of upper management telling their own personal stories gets shared with all of Vector’s employees, and it’s easy for employees to get behind a safety program when their bosses are such enthusiastic participants. And as for management? “Our CEO loves it and thinks it’s a great program,” Rylan says. It’s not hard to see why.

Four years ago, one division had an annual recordable injury rate of nearly 30. After implementing SafeStart the rate plummeted to 4—an 86% decrease in injuries.

Other statistics are just as promising. Over the past few years, near-miss reporting has jumped 600%, from 100 to 600 reports per year, demonstrating a great deal of participation and buy-in in the safety culture.

Scheduling safety training is always difficult for Vector. With so many divisions and crews constantly moving from one site to another, there is no straightforward way to provide training to everyone at once.

Vector is determined to make its safety training count, so no matter where their crews are Vector will find a training space for a few days so that employees don’t miss out on training. It’s more difficult to schedule but the payoff—workers spending less time traveling and more time upgrading safety skills—is worth it.

One of Canada’s Best Managed Companies

Vector Construction has been named one of Canada’s Best Managed companies by Deloitte and safety is one aspect of an overarching organizational culture of continuous improvement. Every change Vector makes is driven by results and they appreciate SafeStart because its benefits are so obvious, from a reduction in incidents to a huge surge in participation in the company’s safety culture.

It’s no surprise then that Vector is recognized as one of Canada’s most well-run organizations and their success reaffirms how vital a strong safety culture is to any company’s success in the construction industry.

Safety Training is the First Priority

Every business says that employee safety is their number-one priority but at Vector safety training is literally the first thing a new employee does. This means that well before they step onto a job site all new hires at Vector are exposed to SafeStart.

SafeStart provides every employee with the personal safety skills they need to avoid injuries and stay working in the field—and that’s exactly where Vector needs them to be.

And because SafeStart augments rather than replaces Vector’s existing safety program, Rylan is able to effectively integrate it into Vector’s training schedule. SafeStart mixes well with their other safety systems to form a concrete foundation of safety. As Rylan says, “SafeStart complemented everything we were already doing really, really well. I love the program and think it’s great.” 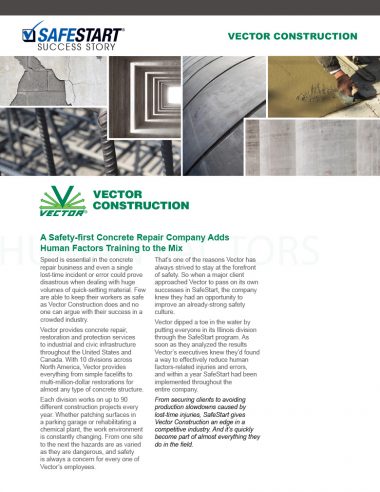