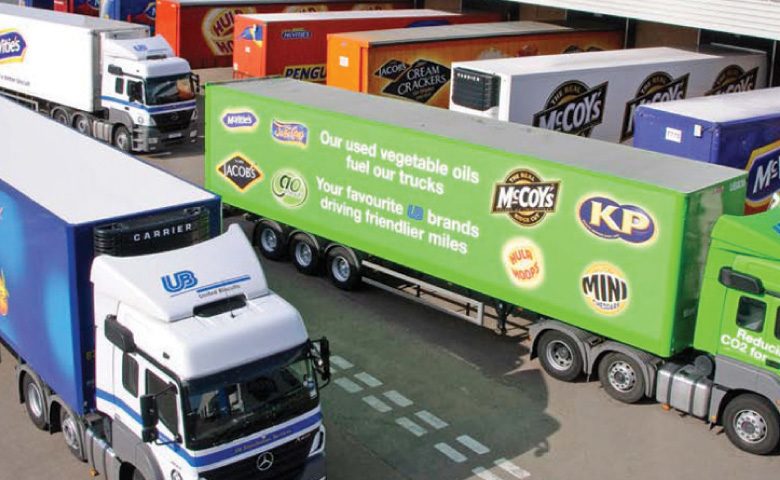 Creating a Culture of Prevention

United Biscuits, a leading European manufacturer of biscuits and snacks, operates a national distribution hub in the center of the UK supplying large supermarkets and smaller wholesalers with over two and a half thousand products each day resulting in over 100 million cases distributed each year.

With around 310 people working at the 38 bay distribution centre at any given time—including shift and agency staff in the warehouse, office workers, customer services, order processing and drivers—the logistics of implementing a safe, consistent method of working across its 3-part work shift system can prove a difficult task to ensure staff are safe at all times.

Mike Howells, Logistics Operations Controller at United Biscuits, explained the situation, “There was a problem maintaining consistency in safety due to the number of staff and the shift-style pattern of working. Although the Midlands Distribution Centre had a good safety record, we wanted a way of building the safety culture within the site to help focus employees and avoid unnecessary accidents”. Similar to many workplaces, one of the most common types of accidents at the United Biscuits’ warehouse were slips, trips and falls.

There has been positive feedback throughout the site on the training and the program, from the logistics director to the shop floor staff—they were all trained together. Not only does this promote team work, but it also gives the message that all are responsible for safety and there is no divide between employees as far as safety is concerned.

To combat these issues the team at United Biscuits wanted to implement a system that would improve the general safety culture within the distribution center whilst helping to promote consistency amongst all staff, no matter what shift pattern they were working. As a result, SafeStart was implemented in 2009 and Mr. Howells was very impressed with the way it was laid out and the level of involvement that all employees had during the implementation process.

The SafeStart program was developed by Larry Wilson of Electrolab Limited with the idea that because most injuries share a common state-to-error pattern, employees can be taught universal skills to reduce the risk of injury in any situation, no matter what shift pattern—whether they’re in the warehouse, office, at home or on the road. The program helps employees improve safety awareness by understanding the four states and four critical errors that cause most injuries.

By first understanding the four critical errors that lead to most injuries and then focusing on the root causes of these errors, such as rushing, frustration, fatigue and complacency, the SafeStart program gives employees the tools to keep safety in mind—even when they are under pressure. The program works by making employees aware of their own actions and the hazards around them and gives them the skills and techniques to identify the state-to-error risk pattern to help them reduce the possibility for errors. (Figure 1 and 2) 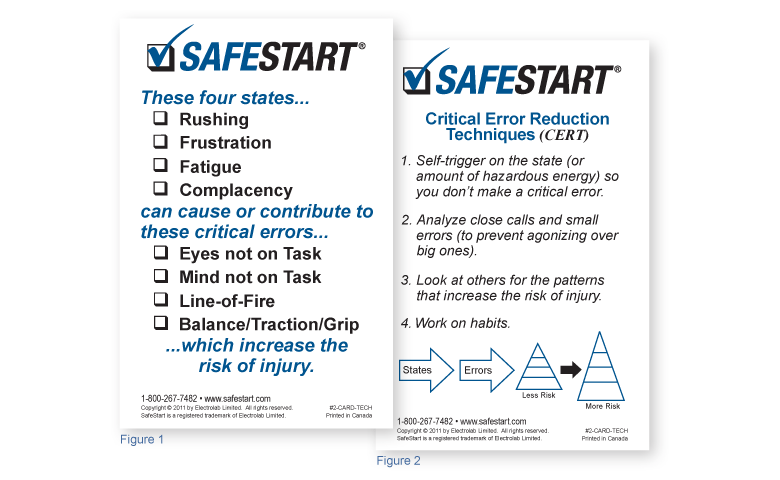 SafeStart helped to create a culture of prevention at United Biscuits Logistics that allowed each employee to have greater focus on his or her actions as well as the consequences of these on themselves and others.

By creating a communications platform for the provision of safety information and placing the SafeStart logo around the building, employees could be continually reminded of the safety culture within United Biscuits. To ensure employees did not just think about safety in the workplace, occupational safety messages were placed on exit walls to remind everyone about the importance of being safe on the journey home and outside of work.

During the initial stages of the implementation, a member of the SafeStart team visited The Midlands Distribution Centre and trained the entire workforce as a group. A United Biscuits Logistics member of staff was then provided with additional training that enabled them to deliver additional modules to both existing and new staff, allowing the SafeStart program to be implemented throughout the business on a continuous basis. Mr. Howells commented, “There has been positive feedback throughout the site on the training and the program, from the Logistics Director to the shop floor staff—they were all trained together. Not only does this promote team work, but it also gives the message that all are responsible for safety and there is no divide between employees as far as safety is concerned”.

Internal surveys are regularly conducted at United Biscuits to gauge satisfaction within the company. The 2011 survey revealed that out of 244 responses, 209 employees strongly agreed or agreed that health and safety is taken seriously at Midlands site. That equates to 86% of the workforce. Mr. Howells said, “We have seen some fantastic results since implementing the program, including at present we have not had any lost time accidents for over 700 days. In the first year of using the program we saw an 80% reduction in lost time accidents, a 40% reduction in lost time hours and a 16% reduction in accidents.

Mr. Howells added, “Further to improving our safety culture and safety record we really liked the SafeStart program because it allows employees to think about safety at all times, including at home”. At the end of the training, each employee is given a specifically-developed child-friendly SafeStart Home Kit so that they can share the valuable safety lessons learned with their families, particularly with children and grandchildren. “The idea of safety is communicated positively and shows that everyone has a duty of care in and out of the workplace. The improved safety culture has also improved the quality and efficiency within United Biscuits. Understanding everyone is responsible for each other, people now work better in teams, looking out for each other and there is a stronger productivity and work ethic.”

As a result of the changes made to the safety culture with the help of the SafeStart program, United Biscuits has been presented with several prestigious awards recognizing its achievements and dedication to safety and its employees. United Biscuits has won the British Safety Council International Safety Award five years in a row and has achieved a Five Star accreditation in safety in both 2010 and 2011 with a 96% and 96.6% score respectively. This accreditation has automatically entered the company in the British Safety Council Sword of Honour Award, one of the most prestigious awards in the safety calendar, with only 40 organizations worldwide winning.

United Biscuits won Swords in both 2010 and 2011 and also received the Globe of Honour Award in 2011, an award that recognizes a business commitment to environmental management.

Since implementing the SafeStart program, United Biscuits has been working to further enhance the program and to put in place a system to train new employees and potentially implement the program into other areas of the company. 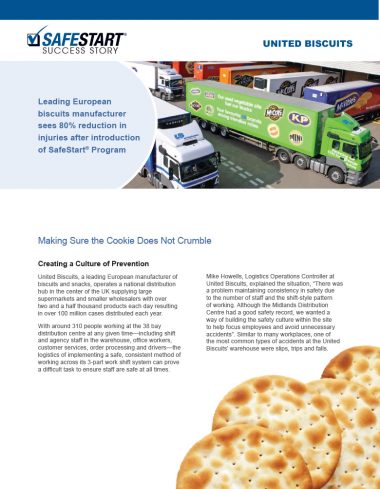