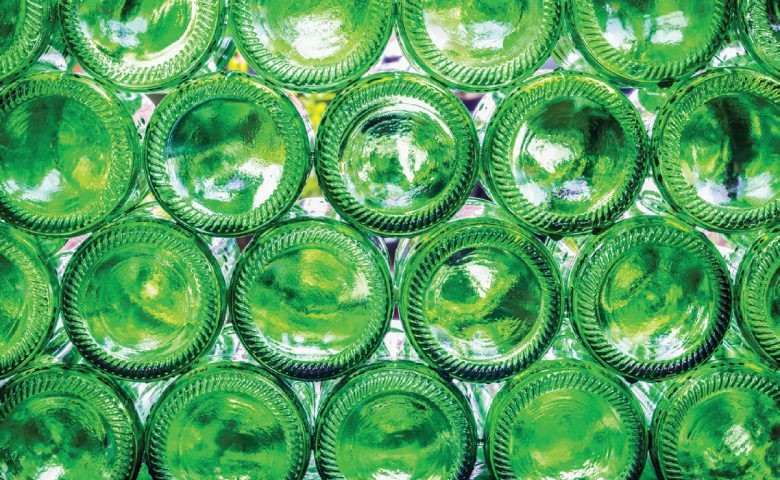 Heineken Brazil felt there was room for improvement when it came to its workers’ behavior.

In 2012, Heineken Brazil identified an opportunity to reduce the number of work-related accidents at its plants. The safety management tools that were already in place ensured a good level of safety at the operations, but the company felt there was room for improvement when it came to its workers’ behavior. In order to continue reducing accidents and make improvements in the area of safety management, the strategy chosen was a behavior-based safety program. This program was designed to promote an innovative approach to developing risk perception concepts that involved all employees, starting with the top management and continuing on to the administrative and production areas. SafeStart® met the company’s needs perfectly as the program uses a unique and simplified language to orient employees on how to adopt safe attitudes both within and outside the work environment.

There were some big expectations. In 2012, there were 27 occurrences at the Brazilian operations and the company wanted to meet the Heineken global goal of operating with zero accidents.

Heineken already used the DuPontTM STOPTM initiative globally as an observation tool for behavioral safety. SafeStart and STOPTM were the top solutions evaluated for the implementation of a behavior-based safety program in Brazil. 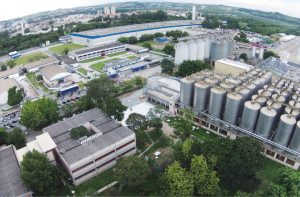 Heineken® operates in more than 70 countries with 165 breweries, over 85,000 employees and more than 250 brands. It is the brewery with the largest presence worldwide and has a history marked by success that began in Amsterdam back in 1864. It became a household name through the production of major beers and brands. 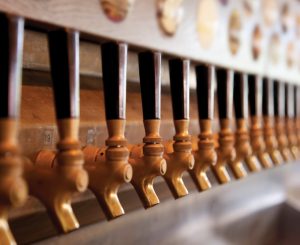 The greatest challenge faced during the process was reaching the huge number of workers, since all needed to receive the training. This challenge was overcome thanks to communication that began with top management and extended to its operation team, ensuring fast engagement with the SafeStart methodology. The company’s management guided the entire process in defining and choosing the program, including the President and Vice Presidents in Brazil. SafeStart encourages employees to practice Heineken’s global safety standard, which is to “put safety first.”

SafeStart is an attractive program for Heineken because:

Over 1,200 workers were trained from the operational and administrative areas all over Brazil.

The leadership’s commitment made it possible to accommodate the training even with high production demands.

Following safety procedures and adopting safe attitudes stopped being applied as merely a requirement and something mandatory, and instead became viewed as something valued and recognized.

It was clear that employees were absorbing the concepts of the SafeStart program when they naturally began to report paying attention to the combination of mental states and errors they experienced to avoid incidents.

Besides managing the number of accidents and incidents, the program has helped the company reduce the cost of vehicle insurance and cut down on traffic fines.

To ensure the success of SafeStart at Heineken Brazil, the office headquarters in São Paulo and Jacareí also became involved with training. This included the direct involvement of the HR Corporate Manager and the People Development team. The HR team promoted the creation of a committee that included members from all corporate areas, which in addition to offering support to implement the program also made it possible to create a safety management model and specific training for employees who work outside the manufacturing environment. With the reduction in the number of accidents and incidents involving employees, there were fewer production slowdowns. And with fewer safety-related interruptions, the environment became safer and more productive.

Due to the significant results achieved in safety management in 2014, Heineken Brazil was distinguished with the Safety Star for having the lowest accident rate in the Americas. During that same year, it also received the global award as part of the Heineken World Day for Safety and Health at Work.

Each month, data from SafeStart cards submitted by employees serves as the basis for prevention campaigns, which are disseminated to workers via e-mail, internal television screens and banners. The Internal Work Accident Prevention Week includes fun activities that apply the concepts of the SafeStart program. The program basics were also included in all new employee orientations and have been expanded to third party and service provider management.

During the entire process, what most surprised Heineken was the simple language SafeStart used to address human error. This has proved essential for swift assimilation and safety awareness in all areas and at all levels of the company.

What is Heineken doing to keep the SafeStart concepts alive in the minds of each employee?

The implementation of the SafeStart program has become a reference and initial milestone in safety management, not just ‘for people’ but rather safety management ‘with people’ at the Heineken Brazil operations. 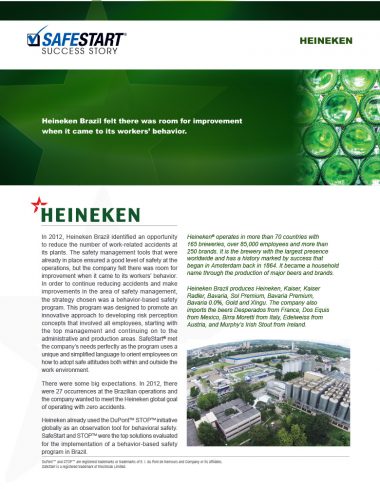 DuPont™ and STOP™ are registered trademarks or trademarks of E. I. du Pont de Nemours and Company or its affiliates.