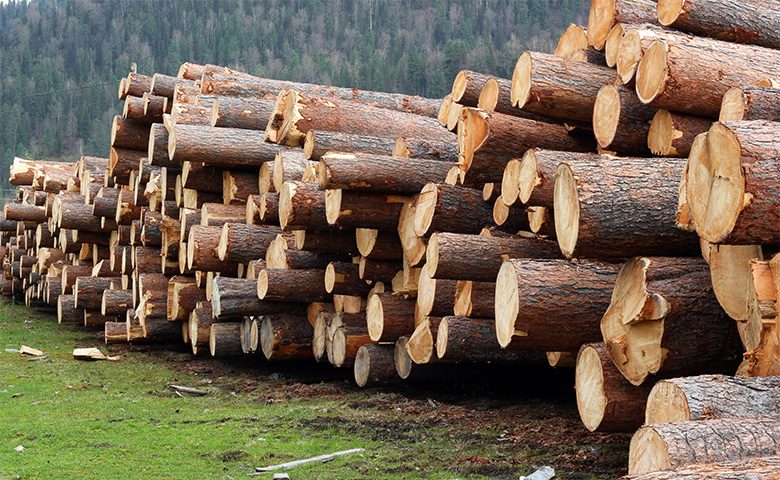 From “Back of the Pack” to “Industry Leaders in Safety”
BC Sawmill reduces WCB expenditures by over $1 Million per year.

Based in Vancouver, BC, Canfor is the largest producer of softwood lumber and one of the larger producers of northern softwood kraft pulp in Canada. A few years ago, Canfor merged with Slocan Forest Products Ltd., increasing the company’s production to over 5 billion board feet per year. One of the properties obtained in this acquisition was the Slocan Sawmill. The mill has two production lines; a computer-optimized band head-rig extracts the highest value from larger, high quality logs and a chipping canter converts smaller logs into dimension lumber. The mill has an annual capacity of 100 million board feet of lumber and 59,000 bone dry units of wood chips. 250 people work in the mills and woodlands.

Previous to the merge, the Slocan mill had been shut down for a period of seven months. A decision was made to re-open this facility and bring this division back to profitability. The mill production facilities needed re-investment to purchase new equipment and modernize. One of the major financial drains standing in the way of this re-investment and the long-term financial viability of the division was the extremely high amounts paid to the Workers Compensation Board (WCB) on an annual basis due to the mill’s historically high injury and incident rate. Over the previous ten years the amount paid annually to the WCB had averaged as much as $7,800.00 per full time equivalent employee.

Tom Gilgan was brought into the Slocan facility to work with the development committee, management staff and crew to put together a business plan and to get the division up and running profitably. Tom, who brought to the table over 30 years of experience managing Health & Safety in the forest industry, decided one of their first priorities should be to reduce the financial burden of the WCB payments. According to Tom, “When I got here, I found the people who had preceeded me had done an exceptionally good job of putting together a safety program designed to ensure that the division was in compliance with all existing provincial and federal safety legislation; one of the best I have seen in my life. But despite this impressive safety program, the average injury rate over the previous 5 years was 10 lost time accidents per year among the 150 people working at the facility— certainly a record that could be improved upon.”

Further investigations and discussions with mill employees led Tom to believe that this safety program had been designed more to pass audits than to prevent injuries. Tom recalled that, “Ultimately, its aim was to support compliance but not to promote safety”. Tom and the plant safety committee discussed the problem and decided that they needed to get back to the “grass roots” of safety.

Tom, with the full support of the safety committee, decided to take action to establish this grass roots safety mentality throughout the organization. The committee considered a wide range of behavioral and awareness training programs to help them to achieve their goals but in the end agreed that SafeStart was the best choice for the facility. Tom saw that the SafeStart program aligned closely with his own personal values and that the training would quickly help to establish the ‘safety culture’ he had worked so hard to instill at other facilities during his 30 years of experience in the forest industry sector.

The mill contracted with Electrolab Training Systems to provide SafeStart Training materials for all of the personnel at the Slocan location. Alec Dewdney, a senior SafeStart consultant with Electrolab, conducted an on-site train the trainer session for the personnel who then trained the remainder of the staff at the Slocan facility utilizing the SafeStart videos, workbooks, and classroom activities. “Initially”, says Alec, “some participants were a little concerned that the employees might reject the SafeStart program or at least offer passive acceptance, therefore reducing the chance of success.” Alec commented further that, “This was understandable considering the mill had been closed for a lengthy period of time. Once the mill was reopened, the employees had placed an extremely high priority on production because they wanted to keep the mill open. As management began to show enthusiasm for the SafeStart program, the initial fears seemed to evaporate and the participants took to SafeStart quickly, demonstrating excellent leadership skills.”

To date every person at the Slocan site (including managers, production workers, and office staff) has been through the SafeStart training program and it has become an integral part of the personnel induction process. The way SafeStart is presented to the crews is not as a workplace program but as “a way of life”—something that will keep you safe while you are at work but also while you are at home and while driving.

The Safety Committee challenged the crews to take their SafeStart training home and share it with their families and they made it happen. One humorous side effect noted was that employees are now sharing anecdotes with their co-workers of how their spouses and children were reminding them to keep their “mind on task or eyes on task” while working around the house or while at the wheel of the family car.

“We are also seeing the effect of the training on the mill floor” added Tom. “As I go through the plant I constantly hear the crew members using the SafeStart language and people reminding each other about the SafeStart State & Error Patterns.” Tom recounted a recent occasion when he was following one of the employees up a flight of stairs. The man became momentarily distracted by one of the processing operations taking place below and as a result hooked his toe on the step and momentarily lost his balance. The employee immediately turned to Tom and said, “So much for eyes on task!” Tom noted that the employee was using the SafeStart Critical Error Reduction Technique (CERT) of “analyzing close calls and small errors to prevent agonizing over big ones” and added that he also observed that the man was holding the handrail when he lost his balance; one of the safe habits that are enhanced through SafeStart training.

Springer Creek Sawmill has dropped from a Medical Incident Rate (MIR, a combined measure of medical treatments, lost time accidents, restricted work duties) of 48 (the five year average in the years before adopting SafeStart) to 9 in year 7 (the year they started their SafeStart Training) and has continued to drop. The mill finished year 8 with an MIR rate of 0.86 and without a single lost time accident; an incredible improvement from the average of 10 time lost accidents per year (with an average of 75 days lost per time lost accident) in the five year period before year 8.

The safety committee at the Slocan site plans to offer refresher training on SafeStart to all personnel and are also hoping to introduce SafeTrack, a Safety Observation and Feedback program designed to compliment the SafeStart Training.

Also in the works is a Family SafeStart Day to be hosted by the company where the spouses and children of employees are invited to participate in SafeStart Training.

“Today the people who work at the Slocan Mill are exceptionally proud of the fact that they have gone from ‘the back of the pack’ to the position of ‘industry leaders’ in terms of safety performance” Tom stated proudly. “As a result of our improved safety performance, the WCB paid out $3.06 per full time equivalent (FTE) during year 8, which is a remarkable improvement compared to payments of as high as $7,800/FTE paid out in previous years; a yearly saving of over one million dollars. In any business, leaving a million dollars on the table each year will eventually make you uncompetitive and we were no exception. We are committed to the SafeStart program and to carrying this success forward for years to come.” 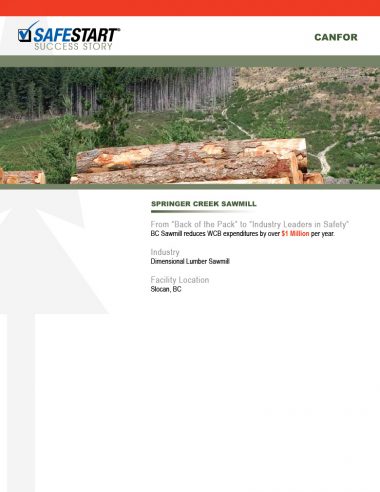