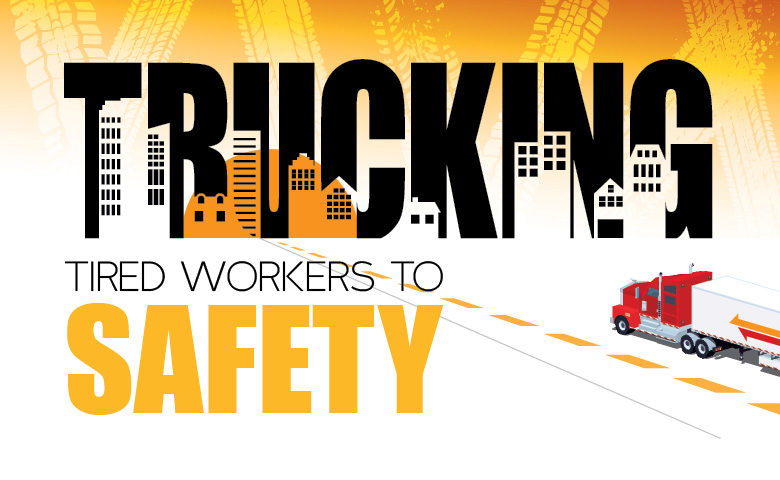 It’s no secret that fatigue is a huge problem for the transportation industry.

It’s the elephant in the passenger seat of every commercial truck. No one spends more time behind the wheel than transportation professionals, and no other industry can identify with how easily people can be lulled to sleep while performing their job.

Over the last half-decade, more transportation companies have come to recognize just how dangerous fatigue is. They know that driving tired is the equivalent of driving drunk, that the vast majority of transportation incidents are caused or made worse by human error, and that fatigue is a leading factor in those errors. 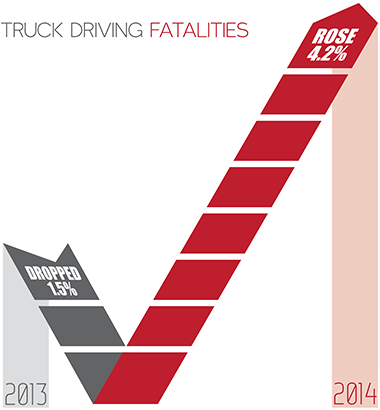 That’s why, in 2013, the U.S. Department of Transportation’s Federal Motor Carrier Safety Administration revised the hours of service to cap how long truckers can be on the road in a week and in a single continuous stretch. The goal was to reduce the number of tired truck drivers and cut down on fatigue-related collisions. It’s a well-intentioned regulation but the results are mixed (including because the new rules affect only a portion of transportation workers).

The number of fatalities involving large trucks dropped by 1.5% in the year the new rules were implemented, but there was a 4.2% increase the following year. Of course, with the dramatic spike in distracted driving among all road users, this increase may have been even larger without recent industry changes. Regardless, the industry hasn’t seen the results it was hoping for. Part of the reason serious, preventable accidents are still prevalent is because administrative controls and technology are being used to combat a performance issue. There isn’t a single piece of legislation or electronic logging software that will prevent a driver from becoming less attentive 10 hours into an 11-hour shift. Meanwhile, non-administrative tools like human error prevention training are woefully underused. Others, like autonomous vehicles, are still several years away.

There are also signs that the transportation industry is only a small part of a much larger problem. Large trucks are responsible for fewer than 1.5% of road fatalities. Even if we eliminated every single trucking accident, motor vehicles would still be one of the leading causes of fatalities.

The truth of the matter is that fatigue isn’t just an issue for transportation professionals. It’s a huge problem for the rest of us too. According to Injury Facts 2017, most crashes happen on weekdays between 4 p.m.–8 p.m. In the late afternoon and early evening, most people are driving home from their job. Or they’re driving to the grocery store after a long day. Or they’re rushing their kids to after-school activities. Wherever they’re driving, they’re likely to be at least a little tired.

Fatigue is a universal issue. It affects every worker in every industry. The conversation about tired drivers should extend far beyond the transportation sector. If there’s one topic that should keep every safety manager up at night, it’s fatigue.

In many ways, the transportation sector has led the charge on dealing with workplace fatigue. It’s time for the rest of us to follow its lead and admit that everyone is at a greater risk of injury when they’re tired—and that safety managers have a powerful role to play in reducing the number of fatiguerelated driving fatalities (not to mention the uptick in other incidents when workers are tired).

The transportation industry has already demonstrated that introducing new regulations is unlikely to curb the impact of fatigue. We should take a cue from them and target our efforts elsewhere. In my own experience, I’ve noticed three areas where fatigue can be meaningfully targeted that have nothing to do with rules: scheduling, off-the-job safety, and self-awareness.

The Federal Motor Carrier Safety Administration had the right idea in capping the number of continuous hours that truckers can be behind the wheel. But the number of hours spent driving is only part of the problem. The time at which those hours happen matters. There is plenty of data that suggests shift work is a huge cause of fatigue and can negatively affect workers’ health and safety. This is true for shift workers in every industry.

The pace of work can also exacerbate fatigue. If production issues or impending deadlines require employees to work harder while they’re on the clock, they’re more likely to be exhausted by the end of their shift—when they get into the car and drive home.

Most safety managers have little control over the length or timing of shifts, or how hard workers are pushed. But it’s important to be aware of times when scheduling issues are going to increase fatigue in the workforce and to take steps to mitigate it when possible.

Even if we eliminated every single trucking accident, motor vehicles would still be one of the leading causes of fatalities.

When safety folks talk about off-the-job safety, they usually only shortly discuss home-related issues in safety meetings. But it’s also important to provide skills and resources that can actively be used at home. How employees sleep at night affects how safe they are at work, and offering material support as well as education on the subject could help them sleep better and stave off fatigue.

Bringing up the subject of sleep can make employees feel that their employer wants to control their time off work. It’s important that the training, educational sessions or information provided comes from a place of care and not control. If these initiatives show that the employer cares about the wellbeing of the workers and their families, they will be more likely to embrace change.

Fatigue is a universal issue. It affects every worker in every industry.

Even with the right scheduling and off-the-job safety support, at some point, nearly everyone will be fatigued while driving. It’s so subtle in its onset that without a strong sense of self-awareness and well-developed habits, drivers will be oblivious as fatigue slows reaction times and causes their mind to drift off the task at hand.

Training can teach people to anticipate and adjust their actions when fatigue arises, but workers also need to understand how and when to take action to compensate for their tiredness. Complacency plays a significant role in whether people take fatigue seriously or slough it off as being “just” tired. After all, drivers travel thousands of miles each year performing the same actions over and over again. Next to walking and talking there isn’t anything else that has such a high frequency of repetitiveness and therefore the highest levels of complacency.

When combined, fatigue and complacency compound risk. Fortunately, they can be tackled together with formal human error training and a lot of practice. Once people have the knowledge and the skills to manage their fatigue and complacency, they will do it 24/7, in any mode of transport, whether they’re driving for work or simply going home after a long day.

The transportation industry has shown that addressing fatigue is as challenging as it is necessary. Broad regulatory changes are unlikely to be enough. Instead, small, incremental adjustment on a personal level are the best way to influence people. It can be slow going, and it means getting safety professionals to buy into the notion that fatigue is a problem that can be solved. But there are almost 38,000 deaths on our roads every year—making an effort to curb tired driving is worth it. 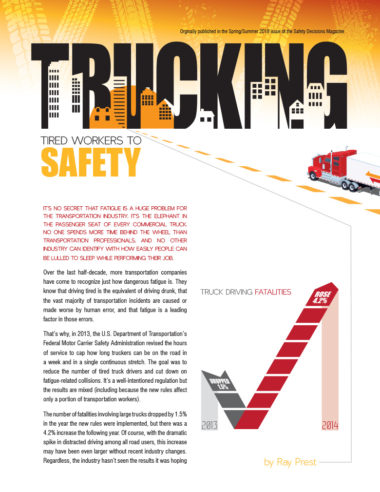