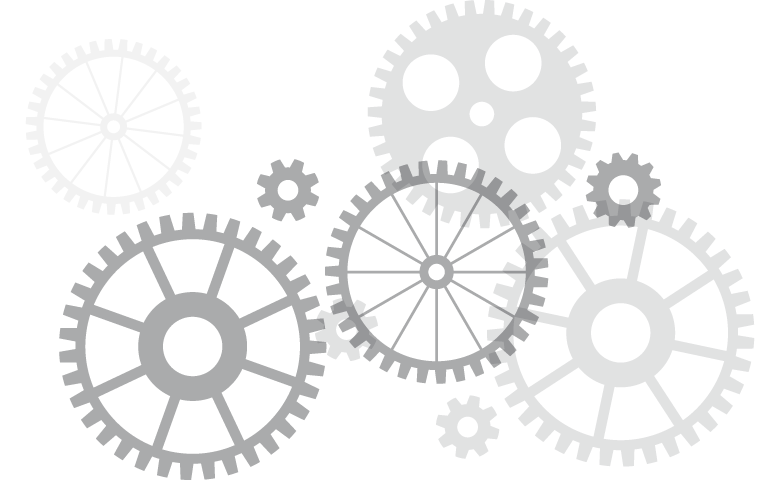 Safety is about good intentions. What nobler goal could there be than saving lives and keeping an entire company’s workforce healthy? These good intentions often focus on power. After all, the safety industry is preoccupied with controlling and limiting hazardous energy—literally containing the power that is present in the workforce.

But power comes in a number of different forms, and it would be a mistake to overlook how important social power is to industrial safety. The most obvious example of safety-related social power is the power dynamic between workers and management, in part because it’s usually easy to see this relationship in action. Typically, power is exerted in a topdown manner, with rules, procedures and safety initiatives.

However, there are competing forms of social influence that can often be equally or more assertive than the power wielded by the safety professional. Let’s call this safety from the shadows—and it represents an informal but solid social power structure that can undermine your safety efforts. At its head are the handful of difficult employees you can find in almost any workplace.

Everyone has had to deal with at least a few troublesome employees. They’re the folks who sit at the back of the room during safety training, make derisive comments in the break room and otherwise undermine one initiative or another. At best, their presence is a nuisance. But if they are able to gather enough influence then they can de facto govern your safety program by signaling which rules and procedures are worth following and which ones they consider pointless regulation.

Whenever we talk about employee engagement and safety culture, what we’re actually discussing is the informal networks of social power. And as every safety professional quickly learns, social power can have a potentially devastating corrosive influence.

Identifying the problem is easy but solving it is much more difficult. The landscape of social influence is constantly shifting and there are no exact rules of engagement. However, one thing is for certain—exerting more power from the top down will only make things worse.

Consider the common objections to any safety protocol: a rule is stupid or ineffective, a new safety procedure is unnecessary, or management won’t make the budget available to pay for actually useful safety equipment. There’s also the insistence from employees that they’re already safe enough, they know what they’re doing, they’re adults and they can take care of themselves.

These are all signs of disenfranchisement. They stem from feeling neglected, marginalized, unlistened to and powerless. And they’re all symptoms of power being centralized. If this sounds like political talk that’s because it is—the original definition of politics is the relationship of influences between people. And at heart that’s what safety is all about: guiding people to behave in a way that improves their safety and reduces their risk of injury.

The most effective way of minimizing the damage caused by employees governing safety from the shadows is to shine a spotlight on it. If you have a problem with your safety culture and employee engagement—that is, if informal networks are exerting negative social power on your safety program—then look for ways to give these informal networks more power, not less. Build a bigger and more inclusive safety institution at your company. Include employees in both formal and informal safety committees, discussions and plans.

As counterintuitive as it seems, the reason giving them more power is so effective is that bringing oppositional employees into the fold makes it much harder for them to complain about the company’s overall safety functions—because now they’re part of it.

If political history has taught us anything, it’s that people want to have representation. People want to feel involved. When people attempt to govern safety from the shadows it shows that one way or another some employees will always express their opinions on the company safety program.

So give employees legitimate access to power in the form of sitting on committees, or solicit their opinion and then act on it. Appointing them to positions of influence, even relatively limited influence such as organizing safety contests, will combat disenfranchisement caused by a perceived monopoly on power. It will also engage individual employees by making them responsible for new tasks.

Rotation is essential, and authority should not only be distributed across job titles but across people too. Representatives from throughout the company should sit on safety committees, and as in any good democratic system the people acting as representatives should change on a regular basis.

Finally, note that real authority should actually be provided. A steering committee for a safety initiative is obviously no use if they don’t hold regular meetings or their decisions are not respected, and workers often have a finely tuned ear for when they’re being paid lip service.

Knowledge is power. The more employees are aware of why something is happening the more respected they will feel. Employees already share information among themselves about why they think a safety initiative has been instituted, whether they think it’s worthy of their attention, and so on. Engaging them while they’re still forming an opinion will shut down the circulation of misinformation and improve employee buy-in. It will also leave employees feeling like stakeholders and not subjects.

There are other forms of education that can also contribute to an overall sense of engagement. Skills training is the most obvious, though any training that workers need for their job is already usually provided. But other skills are less obvious but just as important. This includes practical safety skills such as focusing on the task at hand and staying mentally alert. Dealing with human factors like rushing, frustration and fatigue through training has been proven to reduce injuries, and it demonstrates to employees that you care about their well-being.

In the end, if you want employees more engaged in safety, you have to provide more education in safety. Of course, investing in training education requires resources, and there should always be a relatively equal access to equipment, training and other important resources. There are few better ways to engender resentment than to play favorites among employees or withhold resources.

A poor safety culture is frequently a byproduct of employees being excluded from the safety process. Social power structures can quickly form as a result of workers feeling marginalized, and soon enough these networks can begin to compete for control of the safety agenda.

Fortunately, those same social structures can be used to further your own agenda. As I’ve outlined, and as difficult as it may seem, the solution to unwanted social influence is to embrace informal networks of power. The goal is to empower employees without decreasing your own authority. Doing so takes time, and requires a more consensusbuilding approach than you may be used to, but you will end up dragging safety from the shadows and into the light.

Kevin Cobb is a senior SafeStart consultant and the author of Quit Feeding the Monsters. He has delivered human factors training across North America, including the Arctic and the jungles of Mexico, and around the world. As he nears his second decade helping others improve their performance he spends much of his time sharing what he’s learned through his writing. When not speaking at conferences or training you can find him at home in north Texas where he lives with his family. 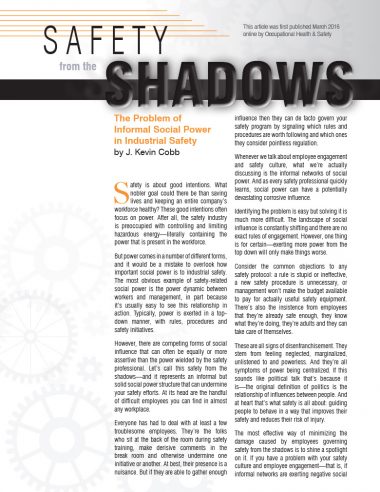