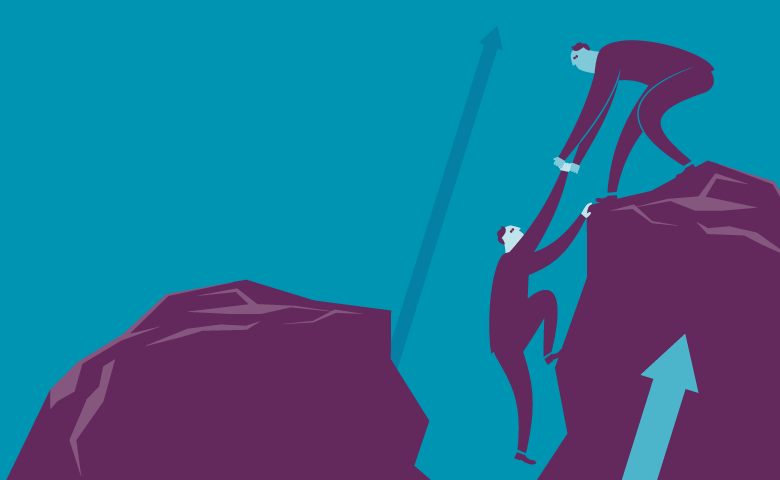 I have one of the greatest jobs ever. As a safety consultant I get to help passionate and hard-working safety folks keep people safe. Most safety professionals also love their jobs—they’re the people who get things done and make real, lasting safety improvements in the workplace.

Unfortunately, for every Mr. or Ms. Wonderful there is, I also encounter someone who has the opposite effect. They’re overly critical and they give you the impression that they wouldn’t spare a kind word if you saved their life. Sometimes they’re hard to spot, and other times it’s impossible to ignore them—once, in the middle of a meeting one of them challenged me to a fight in the parking lot! Not to worry, no one was harmed during the exchange.

We’ve all worked with people like this and they can deflate the enthusiasm and drive of those around them. They’re known as cave people—citizens against virtually everything—and I’ve seen enough of them in different organizations to know their presence can be toxic.

They’re the people who sit at the back of safety training and loudly slurp their coffee, chat with others, play with their phones, and argue with the instructor. I’ve even witnessed more than one cave person take a nap.

After a while I started conducting an informal Pareto analysis and noticed the same thing in one company after another—most workers were generally accepting of safety training, and it was only 20% of employees who produced 80% of the headaches. I found that even when an entire training group seemed resistant the difficulties originated from a small minority.

They’re a problem because often enough they’re ringleaders and distract more than themselves. When they are ignored, isolated or marginalized they tend to pull other employees into their orbit and before you know it you’ve got a number of trainees who are a lot less open to your safety lesson. The effects can be devastating to the overall safety performance.

In fifteen years of traveling to hundreds of client sites I’ve seen the pattern repeat itself again and again. If you’re able to lead these difficult few out of their cave then you can avoid the problems they cause. But all too often safety leaders try to ignore, isolate or marginalize cave people, which often makes matters worse. Years of on-site experience in all types of industry have taught me that many of these so-called cave people can be rescued—but the “let’s hope they find their way out” approach doesn’t work.

As soon as you notice that one of your employees is caught in a cave you need to take the counterintuitive approach of having a private conversation with them in which you ask them to share their point of view. And then you listen.

Nobody was born in a cave, and most people become disenfranchised with safety because they feel like they haven’t been listened to for years. By listening you are demonstrating that you value their opinion and take them seriously. More importantly, you make it harder for them to stand in opposition to the safety agenda because they’re now part of the conversation.

It’s especially important—and more difficult—to listen to people when they’re frustrated and not expressing themselves well. But even when someone is screaming you should do your best to hear them out. Remember when I said that I was invited out to a parking lot? I hoped it wouldn’t come to blows as this guy was screaming in my face! And it was certainly hard to stay calm and properly hear what he was saying, but it proved to be the first of many steps that led this gentleman back to a more productive role.

Once you’ve offered them your ear it’s time to speak their language. Thankfully, when it comes to safety it’s relatively easy to do. I suggest starting by asking them what they think causes most accidents. Here’s some of what you’ll hear in response:

And the list goes on and on. What you won’t hear is, “We need more rules, policies and procedures to fix these issues.” And if you look closely at this list, you’ll see that all of the responses have one thing in common—they’re all caused by a lack of safety skills and personal awareness.

In other words, for all the good that has come out of traditional safety, it has a gaping blind spot: human error. And the reason employees end up as cave people is that for years they’ve seen too much emphasis placed on standard safety structures and too little attention paid to the people who operate within them.

By listening you are demonstrating that you value their opinion and take them seriously.

No matter how effective your safety engineering is, these types of measures will always depend on workers following protocol and procedures, which means that there’s a risk that employees will circumvent them. And when workers start viewing management as deaf to their safety concerns they’ll be a lot less likely to respect the rules you’ve set out for them. 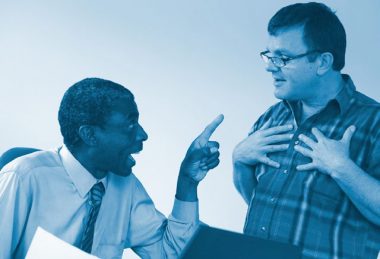 Conversely, providing training that builds workers’ individual skills and awareness, and giving them a chance to provide input when it comes to safety, will foster a sense of inclusion. It will combat the resentment that causes cave people to get their backs up at the mention of safety training. And the increased awareness and skills will reduce human error and lead to a reduction in the company’s injury rate.

It’s worth mentioning that not everyone will want to leave the cave. The common mistake most leaders make however is that all who enter the cave are lost.

Rather than treating cave people as a nuisance, you can recognize that their lack of engagement is a clear signal that something is missing from your safety program. Finding a way to address that gap will not only potentially turn them around, but you’ll realize that’s where the real across-the-board organization improvement comes from. The employees will feel a sense of inclusion. The company will see a decrease in injuries and less push-back on their safety agenda. Everyone wins—and it all starts with going into the cave and listening.

Kevin Cobb is a senior SafeStart consultant and the author of Quit Feeding the Monsters. He has delivered human factors training across North America, including the Arctic and the jungles of Mexico, and around the world. As he nears his second decade helping others improve their performance he spends much of his time sharing what he’s learned through his writing. When not speaking at conferences or training you can find him at home in north Texas where he lives with his family. 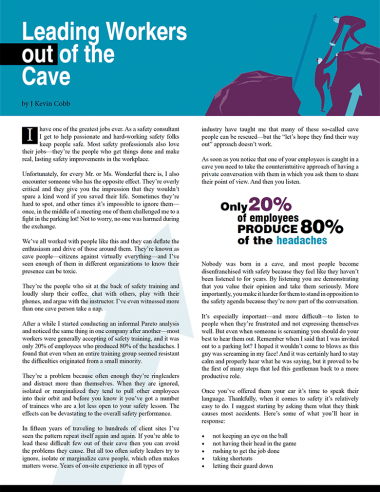