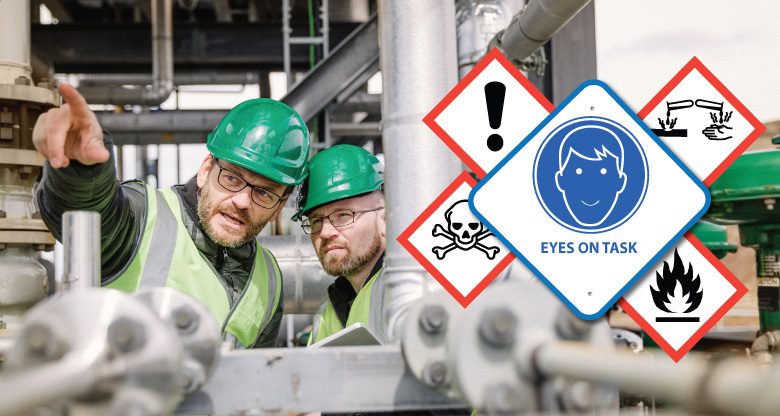 The seeds for the Global Harmonized System of Classification and Labeling of Chemicals (GHS) were sown in 1992 when the United Nations Conference on Environment and Development suggested a “globally harmonized hazard classification and compatible labelling system, including material safety data sheets and easily understandable symbols, should be available, if feasible, by the year 2000.” A short 23 years later (and 15 years after the initial deadline), 67 countries are well on their way to implementing the GHS system.

I’ll balance my witticism on the UN’s delay with respect for the scale and importance of such an undertaking—it’s been a lot of work for them, and for you. By now you’ve probably read a number of articles, handouts, bulletins, and other resources (perhaps even hired a consultant or two) to get educated about the new system. So, I’ll spare you the detailed overview of the specific mechanics of how GHS functions and your compliance requirements, and instead focus on the broader lesson GHS represents—the importance of developing a communication standard for a common safety language (even if just within your facility or organization).

The main problems that GHS aims to solve—hazard communication and developing a comprehensive system for classifying risk—aren’t limited to chemical labeling. Compliance efforts typically drive a company’s safety focus, but they only apply to individual countries. There’s also a great number of issues that compliance measures don’t effectively deal with, most notably human factors.

What if we could develop a safety language that applied to the core values of the safety profession and extended beyond national compliance laws?

A safety language is a collection of words, terms, and phrases that can be used and understood by everyone to articulate either a potential hazard or a desirable behavior. In short, it’s a common understanding. Many in the safety profession lament a lack of common sense, wryly noting the irony of the word “common.” Common sense appears to be in such short supply because it depends on learned habits, cultural signifiers, and other behavioral influencers. As a result, it varies widely from one person to the next and is well beyond the control of safety managers. It’s better for safety professionals to take a cue from GHS and focus on what we can actually influence—common understanding.

Consider for a moment the impact of introducing the phrases “eyes on task” and “eyes not on task” to refer to when someone is or isn’t paying attention to what they’re doing. Suddenly, everyone in the workforce, from the CEO to a line worker, has a value-neutral term to refer to a common problem. Now, when a supervisor tells someone “eyes on task,” the person hearing it will have a clear understanding of what they mean—stay focused on what you’re doing to reduce your risk of injury. They won’t see it as nagging or a reproach, and they won’t be confused about what’s required of them.

It also provides employees with the linguistic tools they need to have effective safety conversations among themselves. In fact, I’ve seen the introduction of a common language act as the catalyst for workplaces that have struggled for years to introduce an observation system.

The trick is to ensure that the language used is specific and widely understood. Saying “work safe today” to your employees at the start of a shift isn’t effective because the exact meaning is vague; work safe how? However, saying “keep your eyes on task whenever you approach a chemical container” will prompt people to check labels, keeping them safer as a result. Of course, everyone needs to be trained on what “eyes on task” means in the same manner that training is required on how to read the new labels.

GHS isn’t meant to displace existing measures to securely contain dangerous materials, but rather to complement them by making it easier for employees to safely navigate chemicals through the use of clear, universal labels. Similarly, a common language can augment rather than replace existing systems by providing an easy-to-understand way for everyone to communicate specific risks.

This language should focus on the aspects of the job that provide the biggest collective risk. In most cases, this will include a handful of physical factors like trip hazards, job activities like material handling or driving, and human factors like rushing, frustration, fatigue, and complacency. These big-ticket issues, and human factors in particular, are also among the easiest to develop a common language for because they often affect literally every single person in your organization.

It took over two decades to adopt the GHS system and I doubt we’ll ever see an international agreement on a comprehensive safety language. Fortunately, it’s a lot easier to adopt a company-wide system than it is to get world leaders to agree on, well, anything. But when it comes to creating a common understanding for your organization you should reach further than GHS does, as chemical burns accounted for only 0.4% of lost-time incidents in private industry in the United States in 2011. Compare that to an injury category like slips, trips, and falls, which were the cause of 25% of lost-time incidents over the same period and which are frequently the result of distraction. It becomes clear which areas of your safety program can benefit most from a GHS-like system.

So if you’re looking for a place to introduce a common safety language in your organization, consider what will have the largest impact. From Canada to Kazakhstan, people in every industry, every job, and every community are prone to the occasional mental mistake or lapse in judgment. And unlike GHS, there are no globally harmonized signs or compliance measures that reliably remind people of the very real hazards that exist when you’re not thinking about whatever it is you’re doing.

If I had to choose one area for the world’s safety leaders to work on, it would be establishing a common understanding of human factors for their employees. They affect interactions with every other type of hazard, and building a common-sense dictionary of human error will improve safety, production, and culture. And if safety professionals each introduce a common language that addresses the greatest risks at their facilities, we won’t have to wait 23 years to see fewer injuries. 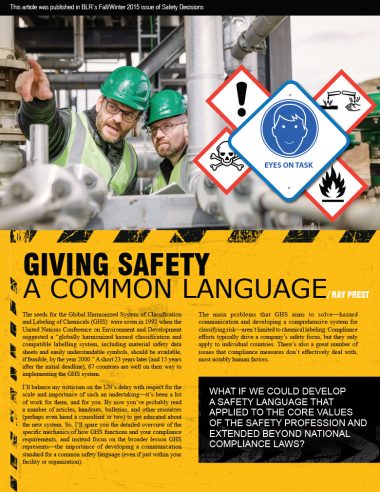