One of the most experienced CSPs I know has a story that he likes to tell about a facility where he used to work. He calls it “the darling of OSHA” because the government used it as a model for new inspectors to get an understanding of what a compliant worksite should look like.

During their regular visits the inspectors would inevitably discover a few issues, but overall the site was an excellent example of the proper application of OSHA’s rules. Employees who worked at the site couldn’t imagine feeling safer. After all, it might have been the most frequently inspected site in the United States.

And then someone at the facility died on the job.

Every year OSHA outlines its list of the top 10 serious safety violations, and while the awareness this provides is excellent, it doesn’t highlight the fact that compliance alone is not enough to prevent all injuries. After all, folks who take the time to read publications like Safety Decisions probably aren’t negligent when it comes to actually following the rules, but I would bet that 9 out of 10 people reading this article are still struggling with tons of back injuries, sprains, strains, slips, trips, and falls.

Still, the belief persists that if you strive to follow the rules you’ll be safe from violations and free from injuries. But the numbers seem to indicate otherwise. While it’s true that last year the single biggest fine was handed out to a company that knowingly exposed workers to asbestos (and certainly punishing companies like this is important), these infractions are a relatively small portion of OSHA’s citations. In fact, in 2014 only 375 of the 39,560 violations in OSHA’s top 10 list were classified as willful, that is, “committed with an intentional disregard of or plain indifference to” OSHA’s requirements. To put it another way, approximately 95% of serious safety violations committed last year weren’t committed willfully.

It’s not like injuries that occur at OSHA-compliant worksites are only occasional “freak” accidents, either. The fact is that injuries, big or small, are difficult to prevent with compliance alone as they are largely the result of worker actions—usually fuelled by complacency and other human factors like rushing, frustration, and fatigue—that lead to inattention and unintentional errors. Some safety professionals feel that following the letter of the Occupational Health Administration Act is enough. Unfortunately, as my CSP friend discovered, that’s not the case—you also have to address the human side of the safety equation.

Complacency in particular is a common contributor to unintentional injuries. When workers get overly comfortable with a procedure they’ll often mentally minimize the amount of risk involved—and complacency can be exacerbated by a belief that rules and regulations form an infallible safety net.

The fact is that injuries, big or small, are difficult to prevent with compliance alone as they are largely the result of worker actions—usually fuelled by complacency and other human factors like rushing, frustration, and fatigue—that lead to inattention and unintentional errors.

At its core, complacency is simply an inaccurate perception of risk. The more you do something and nothing adverse happens, the more you feel you can continue doing it without consequence. It’s no surprise to hear that familiarity with a hazard breeds complacency, and in many everyday cases this may not seem like a huge issue … but if you’re working at heights, it only takes one mistake to become the victim of a potentially fatal fall. 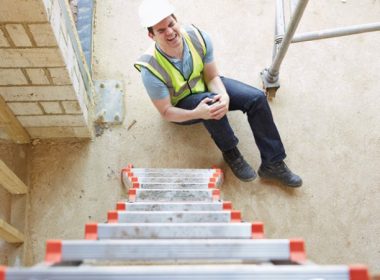 Companies can also get complacent. It’s possible for organizational complacency to erode the usual safety procedures and, if you’re not careful, you might find that someone has failed to properly install a guard rail or wear their fall protection. If an OSHA inspector is in the neighborhood when that happens, the result can be a sizeable fine. Even if there’s no inspector present it still elevates the level of risk for your workers.

The good news is that there are several training solutions that augment OSHA’s compliance measures and that will strengthen your company’s safety program. Last November BLR’s Safety Daily Advisor surveyed 1,294 safety professionals about slips, at the front of their mind, and eventually some new piece of information, production demands or life in general will push your safety lesson aside.

Human factors training presents a longer-term solution. Instead of constantly fighting complacency with reminders like “be more careful” or “where’s your PPE?”, you can teach people real-time skills to maintain focus and keep safety and risk in mind in any situation even when things get busy or go wrong.

Everyone knows that human factors like rushing, frustration, fatigue and complacency can increase the risk of making a mistake, clouding a decision, or causing an injury. But not everyone recognizes the scale of these problems, nor do they realize they can be managed with personal safety skills.

Complacency is one of the most common culprits of injuries at OSHA-compliant companies. Though it eludes OSHA’s top 10, it will continue to lurk in the shadows of every item on the list until it’s effectively addressed at your workplace. 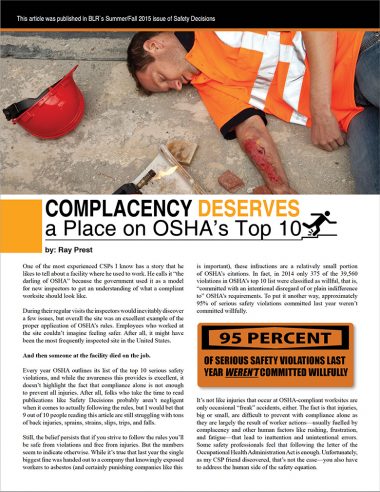