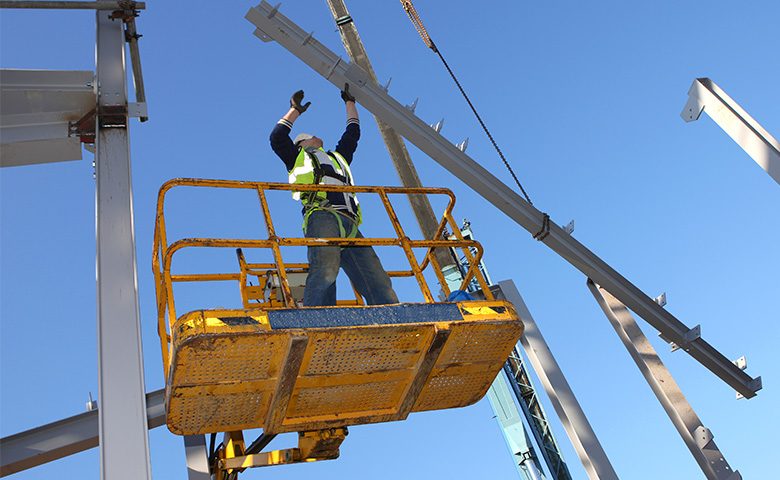 This article by Cheri Genereaux appeared in the
January 2015 issue of Occupational Health & Safety.

When it comes to safety, a lot of attention is dedicated to the biggest or loudest hazards. But if you poll folks in the construction industry on the source of most injuries, you’ll find that they’re rarely caused by the scariest tasks. Most often, they’re the result of all the little hazards that workers navigate on a daily basis.

Every year I speak with over 800 site managers, safety supervisors, trainers and other construction industry representatives and by far the most common complaint I hear is about workers making “stupid” mistakes—things like forgetting to wear PPE, not following a procedure that’s been drilled into their head, jumping down from a tailgate, or muscling heavy material or machines

Anatomy of a “Stupid” Mistake

When safety professionals call something a “stupid” mistake they’re almost always referring to some error or slip-up that someone made when they should have known better and could have avoided if they’d been paying attention or thinking about the consequences. We call them “stupid” because they happen when we’re trying to complete a task that’s usually quite simple and that we’ve done a thousand times before without getting hurt. Even though the mistakes seem obvious and easily avoidable in hindsight, they have nothing to do with someone’s intelligence. Rather, they’re the result of human error. And whatever you call them they happen a lot, because I can’t recall the last time I went a week without hearing a safety manager lament a “stupid” mistake that led to someone getting hurt.

“Stupid” mistakes are made when our perception of risk is lower than it should be. Nobody thinks about the dangers of walking, even though there’s always a risk of tripping, because everyone takes thousands of steps every day. Complete any task frequently enough and we become confident in our ability to complete it safely in the future and minimize the risk in our minds. When you add in a large and extremely visible hazard then people sit up and take notice. For example, if you’ve got a bunch of guys moving a huge I-beam there’s no question that they’re going to be paying attention to the very real (and very big) hazard above their head. But if this was something they did several times every day then I bet they’d start to see it as a much less risky operation, even though the hazard hasn’t appreciably changed.

I recently spoke with a Director of EH&S who said, “When we are working on hazardous or complex tasks we do a risk assessment, job safety analysis and a toolbox talk about it. However, my guys are getting hurt while walking across the site. They simply step on a rock and roll their ankle.” In many cases it’s not the obvious hazards that are getting people hurt, but rather it’s when workers become so desensitized to small risks that they stop paying attention to them.

Another safety professional told me about a worker who went to climb a crane ladder, which was something he did regularly. This time, though, he failed to maintain three points of contact, slipped on the second rung and broke his leg. He barely made it off the ground and now he can’t work for at least eight weeks, all because of a “stupid” mistake.

In both of these examples, injuries occurred not because someone was taking a serious shortcut or had a major mental lapse but because they weren’t focused on small but very real hazards. Their complacency and the frequency of these two activities contributed to taking their mind off what they were doing and they failed to even think about or properly evaluate their chances of getting hurt.

In many jobs the frequency of highrisk activities is pretty low, but construction workers have to deal with lots of hazardous energy on a regular basis. So while they’re used to contending with elevated risk levels they’re also more likely to have a skewed perception of that risk. I’m pretty sure this is why so many construction workers think they’re 10 feet tall and bulletproof— after you’ve operated massive equipment driving your car home seems like nothing. But when you feel like you can handle anything then you end up developing a blind spot to things that can put you in the hospital.

It’s telling that at 29.3%, sprains, strains and tears are by far the largest category of injury in the construction industry. In many cases, the causes of these injuries aren’t immediately evident to the people who end up getting hurt because they’re not looking for them. As we’ve seen, even walking without looking where you’re going on a construction site could end very badly. And the more bulletproof workers feel, the more likely they are to get hurt—and there’s a good chance that it will be a “low-risk” activity that causes the injury.

In many cases it’s not the obvious hazards that are getting people hurt, but rather it’s when workers become so desensitized to small risks that they stop paying attention to them.

The same can be said about falls, which is the largest single cause of construction-related fatalities. When workers are 80 feet off the ground, they take one look over the edge and voluntarily clip into their fall protection because the consequences of falling are obvious. But send them up just a story or two above ground level and they’re much less likely to identify the risks. It’s “just” 20 feet, they think. But I’ve seen stats that say that 50% of workplace fatalities due to falls occur from a height of 25 feet or less, and a common refrain from safety managers is how quickly workers become used to working at a height of 10 or 20 feet and forget how risky it actually is.

The common theme in all of this is attention and complacency. If workers stop paying attention for long enough then they become complacent and start making mistakes. So how do you get workers to focus their attention on what they’re doing, no matter how mundane the task may be? Telling them to pay attention is about as useful as trying to stick a Post-It note on every hazard. But there are several ways to meaningfully engage workers and help them keep their eyes and mind on the risks around them:

Personally, I like to recommend that supervisors develop five or six questions that will prompt workers to think about injury risks. One of my favourites is to ask, “If your son or daughter were to start working here today, which hazards would you want them to know about?” The answer will often highlight a source of danger the employee knows about but wasn’t necessarily actively thinking about, and it will also provide the supervisor with a sense of what his or her workers are worried about.

Asking questions like this only takes 30 seconds and turns it into a dialogue rather than a one-sided mini-lecture. It can also help each employee feel like a valuable member of the team. And I’ve often seen these supervisor-initiated conversations eventually transform into regular peer-to-peer chats about safety a lot quicker than you might think.

The key is to initiate these conversations frequently. It’s much better to have numerous small discussions and awareness sessions than to spend half an hour on it once and then never mention it again. If the goal is to recalibrate workers’ assessment of small risks then this change needs to be reinforced through regular conversations and practice.

It’s easy for workers to become complacent about small hazards in the workplace. But ongoing conversations can prompt them to pay the same attention to small hazards as they do to big ones. And by helping workers look and think more about what they’re doing you can shrink their 10-foot mentality to a more reasonable height—and make them safer as a result.

Cheri Genereaux is the construction industry specialist at SafeStart. She uses her knowledge of human factors to reduce injuries for hundreds of construction companies across North America. 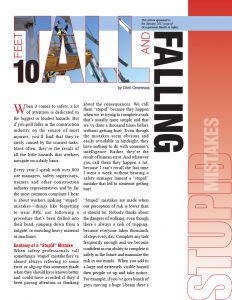