This article by Larry Wilson appeared in the
October 2004 issue of Occupational Health & Safety Magazine.

There’s a lot of b.s. in behavior based safety, to be sure, and no shortage of people pointing it out. But even the most hard-nosed of opponents never seem to argue about the incredibly significant decrease in injuries that are reported! We’re talking about a 60–90 percent decrease in injuries within three to five years—on average. These aren’t the “Cinderella stories,” either, where the site or the company reduced injuries by more than 90 percent.

I don’t know about you, but that seems to be a little too much of an oversight for my liking. After all, bottom line, what else really matters? To further the case, these injury reductions have happened in almost every type of business and industry, private and public, government or military. If you add up all of the successful behavior-based safety implementations by all of the providers, there are thousands and thousands of them (more than 600 in Canada alone).

What could possibly be so unpalatable about behavior-based safety that even well-intentioned people (vs. people with political interests) don’t like it?

For example, I was speaking at an educational safety conference a couple of months ago in Toronto. The night before the conference, while riding up in the elevator with one of the conference directors, I asked him how the conference was going, what with Toronto being none too popular at the time. “Not as bad as we thought,” he said. “Only down a bit.” We kept chatting when we got off the elevator, as we were on the same floor, and eventually I asked him whether he liked behavior-based safety.

“Well,” he said, “I don’t like behavior-based safety at all. It’s a bunch of esoteric b.s. and it puts too much emphasis on the employee.” (Roughly paraphrased in the interests of political correctness and brevity.) Somewhat taken aback, as I was opening up the conference the next day, I asked him if he had ever been involved with or had implemented a behavior-based safety process.

“Have you ever made an observation or been observed?” I asked.

“Well, how do you know you don’t like it?” I asked. “Do you doubt the injury reductions—is that the b.s. you’re referring to?”

“No,” he said. “I’m sure that stuff’s legit—it’s the bloody theory that cheeses me off” (although, once again, he didn’t say cheeses).

“But don’t you think the injury reductions are pretty impressive?” I asked.

We were at his room then, so I said, “Nice chatting with you” and continued down the hall. By the time I got to my room, I was shaking my head in disbelief. Here was a guy volunteering his time to help the safety association, obviously believes in what he’s doing (safety), has never had any direct experience with behavior-based safety, doesn’t dispute the injury reductions—and yet, to say that he has “already formed a negative opinion” is quite the understatement.

I can understand why people with a political ax to grind might not like behavior-based safety or advanced safety awareness training, but this guy is a director of a safety association.

So, what is b.s. and what is believable about behavior-based safety? And, just to keep things objective, let’s stick to what is truly b.s. (inaccurate, falsified, or deliberately misleading), as opposed to that which is merely annoying. The word “behavior,” for instance, is annoying. Some of the people who say they “invented” behavior-based safety are annoying. But semantics and personal popularity alone couldn’t possibly account for the plethora of vitriol that surrounds behavior-based safety. It must go deeper than that. After giving the matter a considerable amount of thought, this is what I think it is:

I think it’s the insinuation that supplying enough soon, certain, positive consequences to the mix of naturally occurring consequences is enough, in and of itself, to eliminate injuries. While this “addition” may indeed have a significant effect on deliberate at-risk behaviors, unfortunately, deliberate at-risk behaviors are not the entire problem. Everyone knows unintentional at-risk behaviors (errors or mistakes) are also part of the behavioral equation, arguably a bigger part because every accidental injury that wasn’t initiated by equipment or component failure has at least one unintentional behavior.

An intentional at-risk behavior might also have been involved, as well, but not always. For instance, it’s quite possible to slip and lose your balance without doing anything deliberately to increase the risk. As a result, it is difficult to believe that saying “thanks” more often actually will keep someone from losing her balance. It might influence the wearing of fall arrest equipment—but as nobody is trying to lose his balance in the first place (already motivated), it’s hard to accept that adding soon, certain, positive consequences will directly affect unintentional behavior or error.

But perhaps that’s it. Touting soon, certain, positive consequences as the be-all and end-all, or that supplying them is the magic elixir we all need, just isn’t believable because it doesn’t account for the error piece.

However, here’s the catch. If it isn’t the soon, certain, positive consequences, then what is it? Something works, we know that much. But what is it? Is it the tracking of the critical behaviors—the leading indicators, as they’re called? Well, the tracking of percent safe is important, but overall participation or how many people are participating how often; those metrics correlate much more reliably than do percent safe statistics. Percent safe isn’t the key, then. It is “illuminating” once in a while and better than nothing, but that’s about it.

Is it the “empowered employee”? Some people say this has to be an employee-driven process, and it is the empowered employee who makes the difference. That might be plausible, except that there have also been thousands of top-down behavior-based safety processes that also have reduced injuries 60–90 percent in three to five years—thousands. So the empowered employee might very well be happier, but not necessarily safer.

OK, if it isn’t the leading indicators or the empowered employee and it isn’t just about the soon, certain, positive consequences, then what is it?

There are two things:

Anything that reduces the tendency to make one of these errors will reduce (acute) injuries. So it’s easy enough to see that lots and lots of good, positive, meaningful observations will improve habits and awareness (mind on task/hazard).

Unfortunately, this takes hard work and continuous management. It also takes skilled observers, which means these people have to be well trained. In other words, it is hardly free.

But improving habits and awareness is not always enough. Even if you can build certain critical behaviors to habit strength, that will help you only if you’re doing the job or task the way you normally do it. It won’t help you all that much if you’re in a mad rush, overly tired, or really frustrated. To deal with those states or human factors, you will need another critical error reduction technique: “Learn how to trigger or self-trigger on the state (e.g., recognize when you’re in a rush) and think about not making an injury causing error.”

There is one more critical error reduction technique, and that is to “Analyze the close calls and small errors (cuts, bruises, bumps and scrapes) and ask yourself, ‘Was this a state I didn’t trigger on, or is this a habit that still needs improving?” All in all, there are four states that lead to four critical errors or injury-causing errors. There are also four techniques to reduce injury-causing errors:

Ironically, when you include the error piece along with the soon, certain, positive consequences piece, it’s a lot easier for most people to buy into the whole process because now they can see the whole picture, not just half of it. You might think talking about human error is like walking on thin ice, but it is better than ignoring it or pretending it has somehow been taken care of with soon, certain, positive consequences. People (employees, managers, and supervisors) know that mistakes and errors are a big part of acute injury causation. Provided you don’t make it personal, they have little trouble seeing how reducing injury-causing errors will improve safety. Actually, it is much more palatable than “your deliberate behavior is the problem, the whole problem and nothing but the problem…”

Behavior-based safety does work. That has been proven over and over again, thousands of times. Why it works may not have been what they told you. Yes, the soon, certain, positive consequences will have an effect (a positive effect) on some deliberate behaviors, especially behaviors relating to personal protective equipment. But behavior-based safety or an observation and feedback process does much more than just provide soon, certain, positive consequences for safe behavior.

Behavior-based safety also improves habits and increases awareness (eyes and mind on task). It takes hard work and skilled observers. The process must also be well managed and promoted. As mentioned before, it is hardly “free.” But the rewards for all of this training and effort are huge. Injury reductions of 60–90 percent are nothing to sneeze at. If you had any doubt or were skeptical about the theory, I hope this has helped somewhat in terms of clearing up what really works and what doesn’t in a behavior-based safety process.

However, one thing that is not in doubt: Observation and feedback processes do work. That is why all of the safest companies in the world use them—not because they’re expensive, time consuming, and must be actively managed, and not because these companies have a lot of spare time and extra cash. No, it is because observation and feedback processes reduce injuries; not by a little, but by 60 to 90 percent. 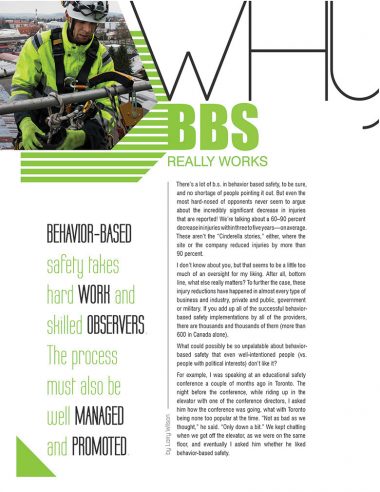